The holidays are just around the corner, and it’s never too late to start cultivating dinner ideas. Finding the best Thanksgiving ham recipes is essential for a successful dinner, as this dish is often one of the centerpieces of the holiday. 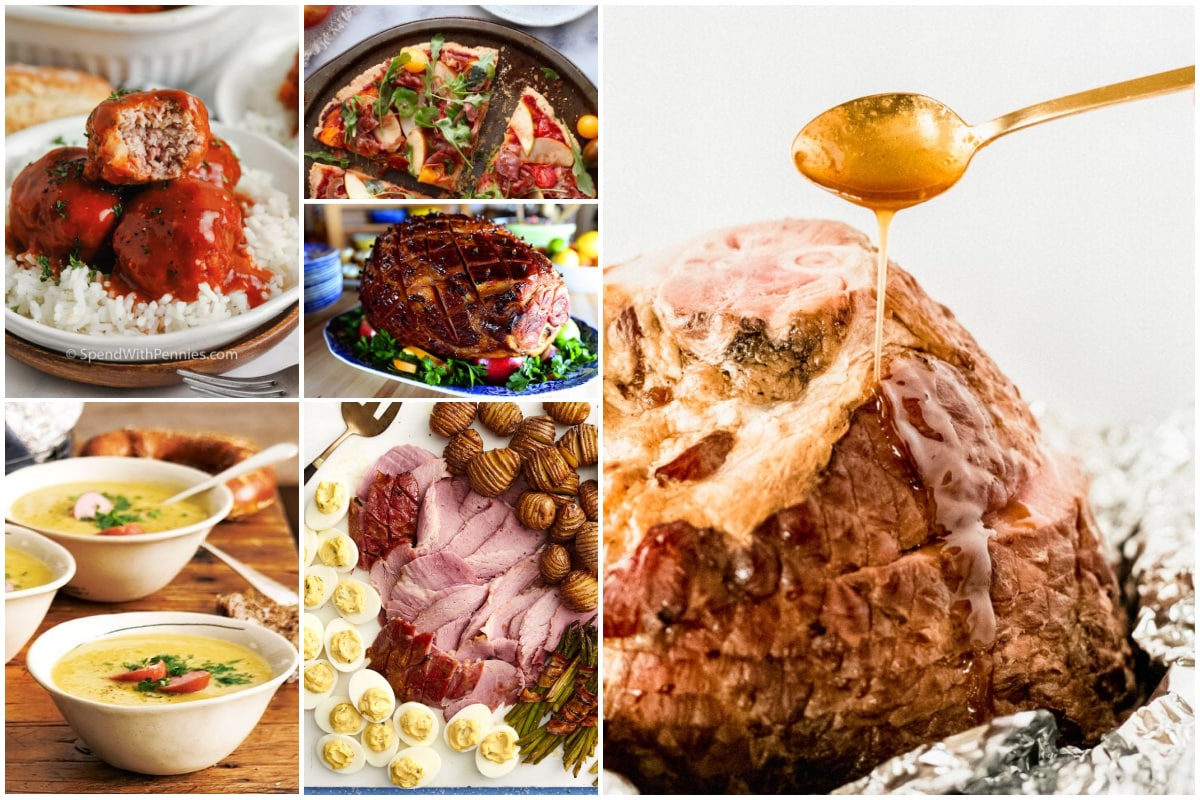 If you’re tired of turkey or need another option for a large household, ham is a great choice. There are countless ham recipes on the internet, and luckily the hard work has already been done for you.

Types of Ham for Thanksgiving

Tips for Buying the Best Ham for Thanksgiving Recipes

The carve of your ham will determine how easy it is to cut and slice after cooking. The spiral carve is one of the best options because it creates an easy cut while also maintaining a high-quality appearance.

Some carves may come pre-glazed, which may not pair well with the recipe of your choice.

High-quality ham can be expensive, so it’s important to understand the full cost of your meat before purchasing. If you’re looking to host a few people, you may be able to buy a higher grade of meat and pay the extra cost while still having enough to feed everyone.

If you’re hosting a large party, it may be more cost-effective to purchase a lower-grade ham for a cheaper cost but have more meat to serve.

Ham cuts should be determined by the number of people you intend to serve. Some are cut in half, others by quarters.

Decide whether a size will feed the number of people you are hosting and whether the ham will be your centerpiece or not. You can also decide whether you want to cook a bone-in or boneless ham.

Boneless is much easier to cut, but bone-in allows for a much more flavorful dish.

When people talk about a cure for ham, they are usually referring to the curing process that is used to preserve the meat. This process can involve either a wet or dry cure, and it typically involves the use of salt, sugar, and spices.

The curing process helps to prevent the growth of bacteria and other microorganisms, and it also helps to improve the flavor of the meat. 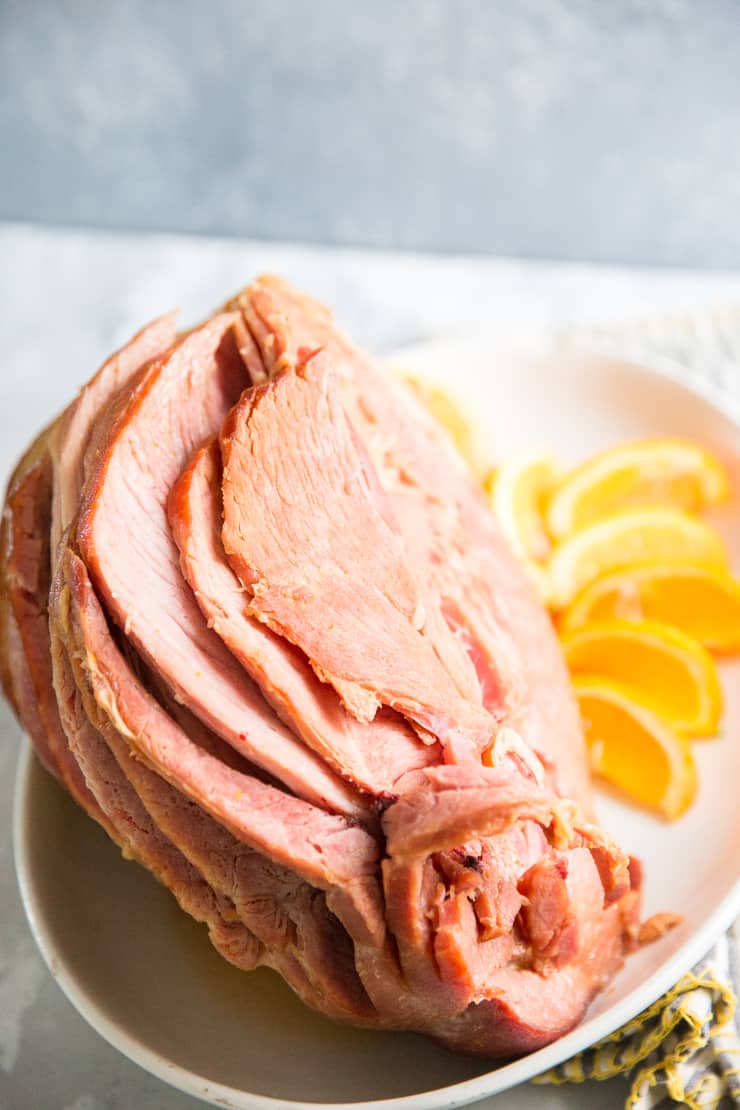 There’s nothing better than the sweet taste of brown sugar-glazed ham. Lemons for Lulu has a simple recipe for a traditional approach to this thanksgiving dish. 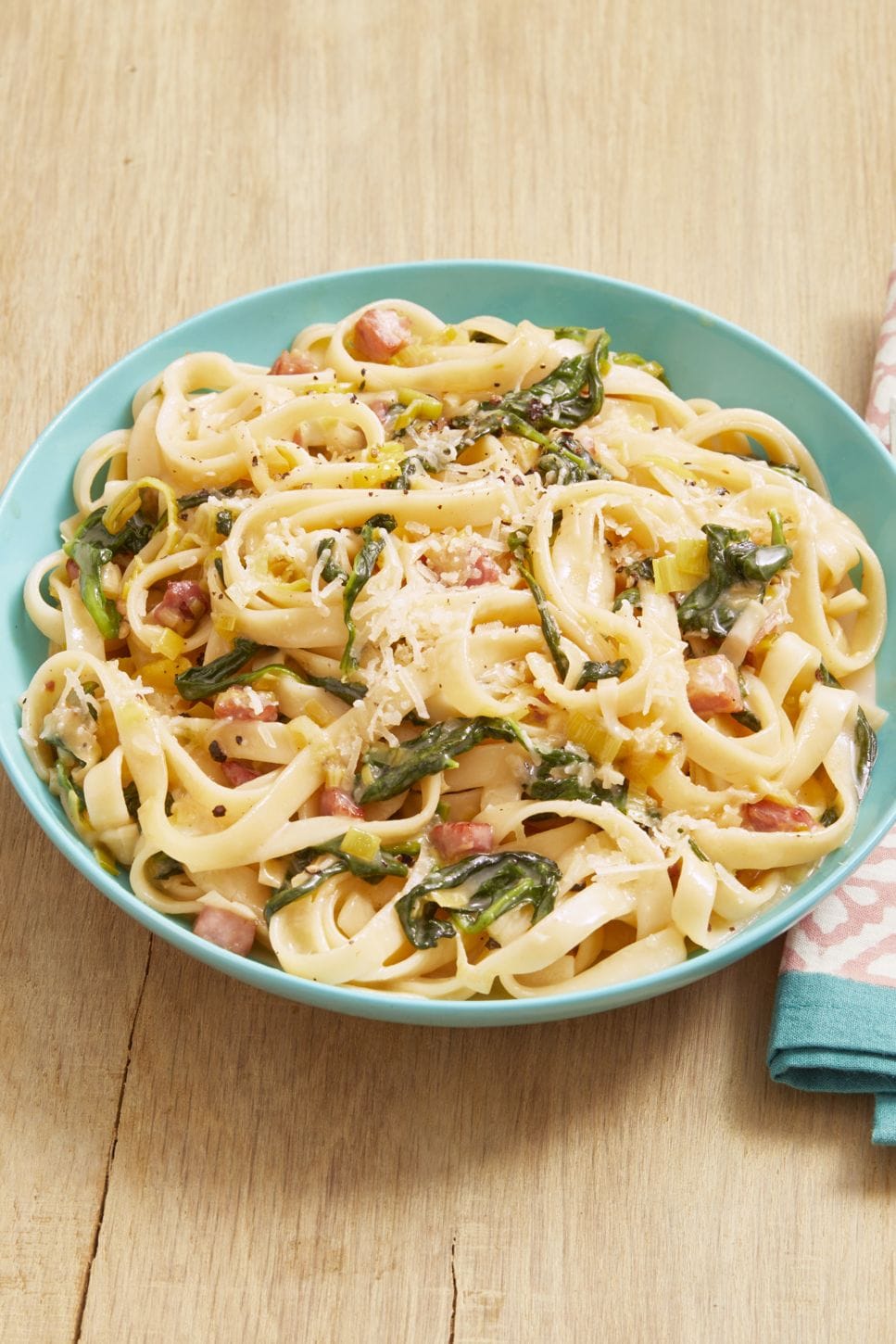 Thanksgiving looks different for everyone. Some people just really enjoy pasta and wouldn’t mind having it for their main dish. The Pioneer Woman pasta with ham, leeks, and spinach is warm and filling and still offers the familiar taste of the holidays. 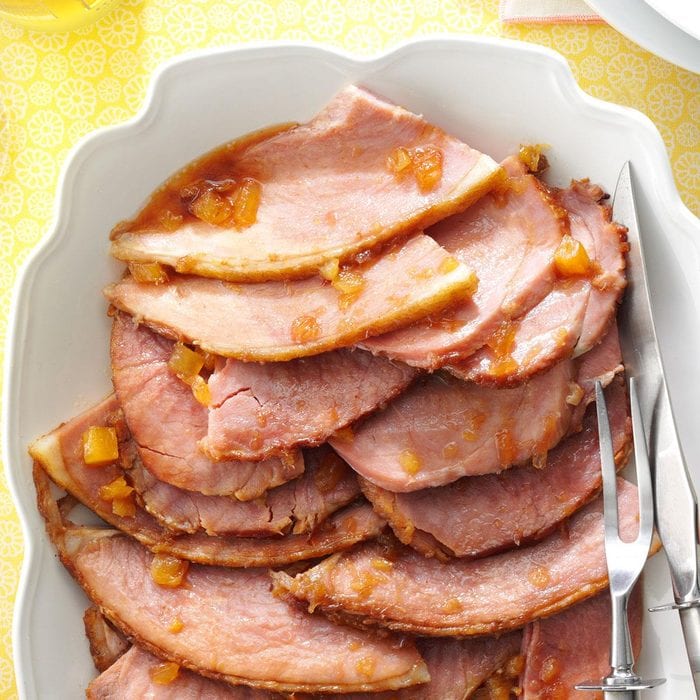 Spiral hams are a popular option for most holiday spreads. You don’t have to over-invest in ingredients to flavor your meat well. Taste of home understands this; try out their five ingredients glazed ham recipe. 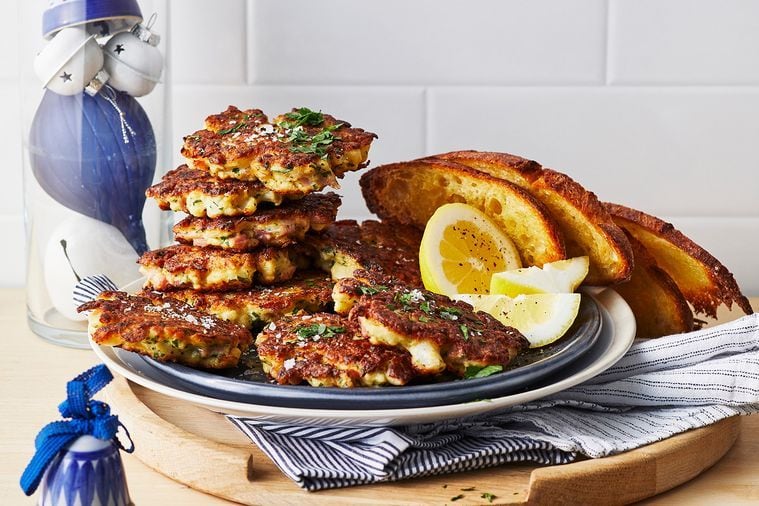 Estimating how much ham you’ll need can be difficult. Don’t let it go to waste; there are plenty of recipes to incorporate your leftovers. The smoked ham and cauliflower fritters recipe found at Delicious is great for breakfast or brunch. 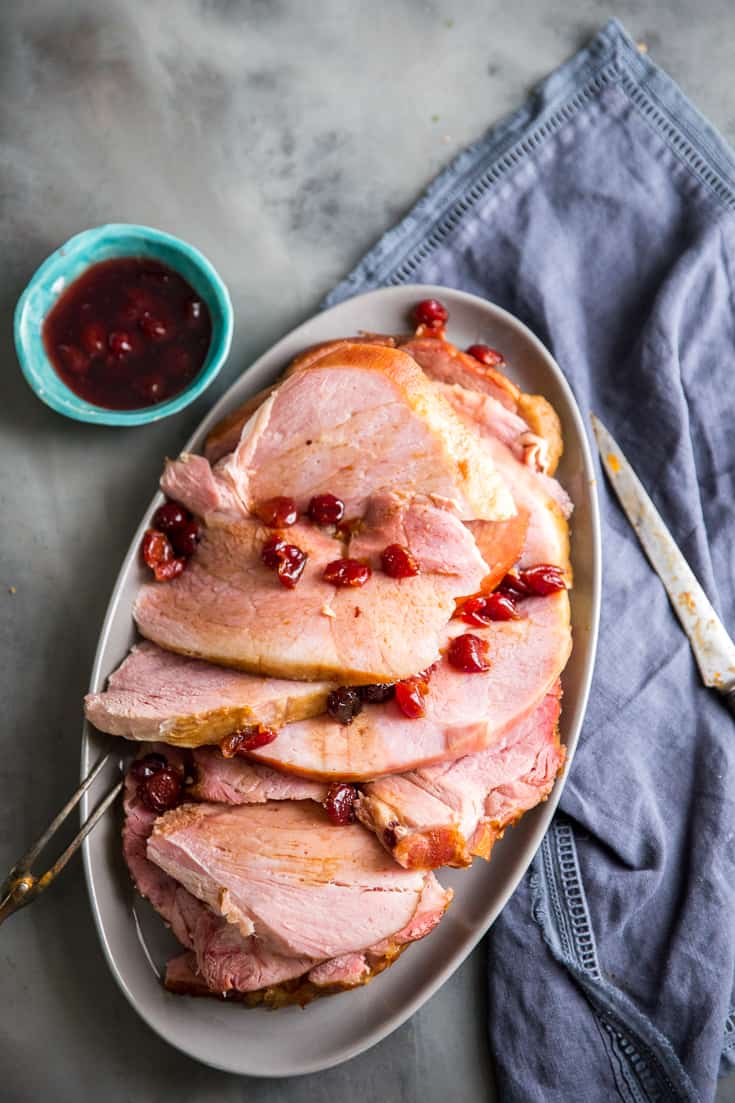 If you prefer a sweeter flavor for your meat, Lemons for Lulu has a cherry bourbon-flavored ham to add to your Thanksgiving ham recipes list. The glaze consists of bourbon, brown sugar, orange juice, and cherry preserves. 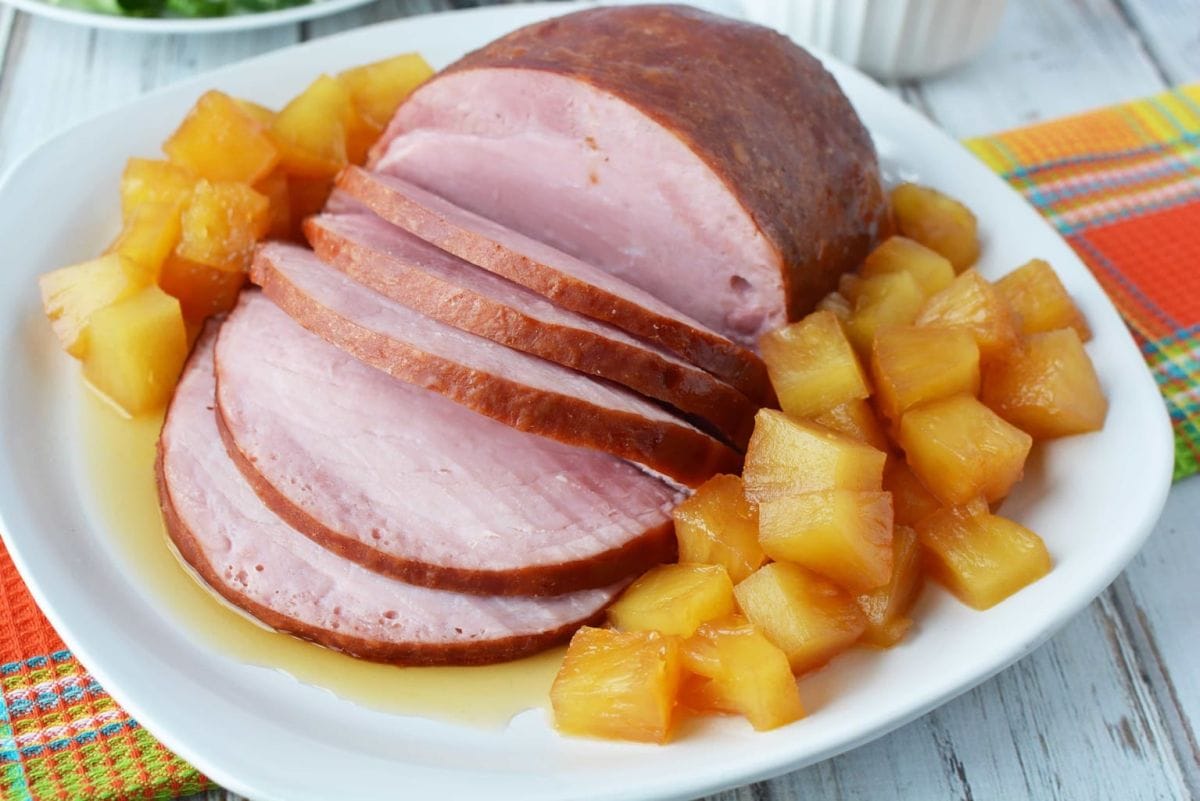 Did you know you can cook your ham in an instant? Not only does it save you cooking space in your oven, but it can cook your meat quicker than a conventional oven. Life Family Fun has a great instant pot ham recipe paired with a pineapple and brown sugar sweetness. 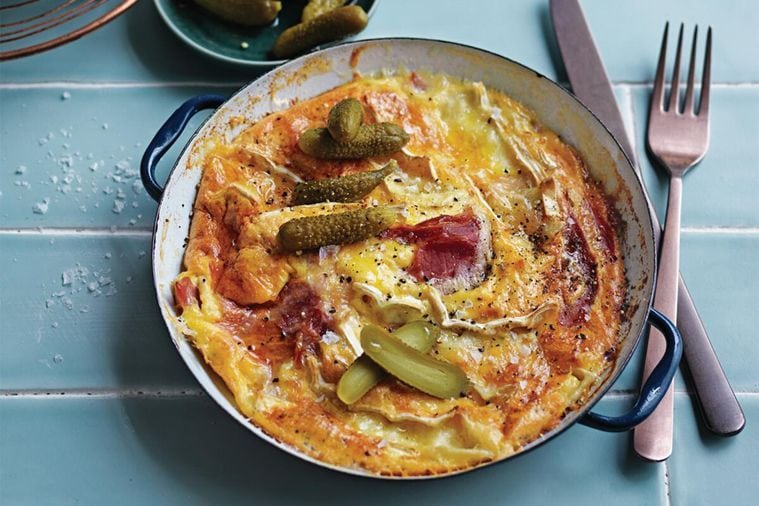 If you prefer eating your thanksgiving meal early in the day, a ham frittata is an excellent dish to serve alongside the rest of your holiday essentials. Head over to Delicious for their ham, brie, and wholegrain mustard frittata recipe. 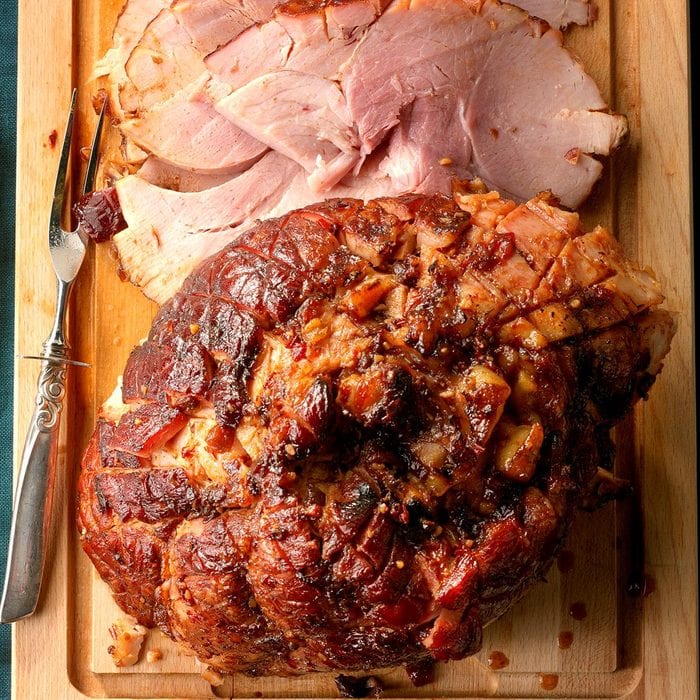 If you prefer a savory ham rather than a strictly sweet one, Taste of Home has a chipotle glaze recipe. The flavor comes from chipotle peppers, ground cumin, and other spices. 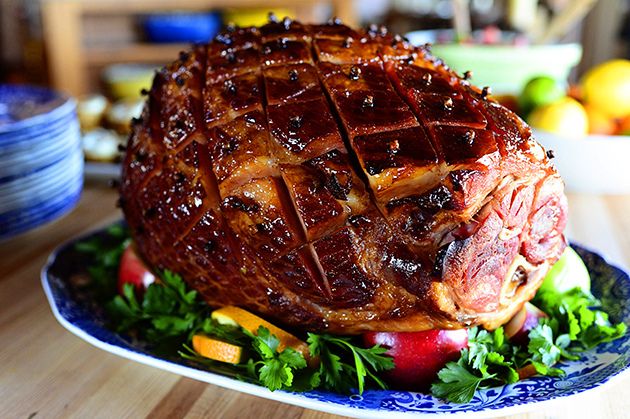 Glazed ham comes in many forms, but most include a brown sugar glaze. The Pioneer Woman has a simple glazed ham recipe that also includes adding a can of Dr. Pepper or Coke, which enhances the flavor of the meat. 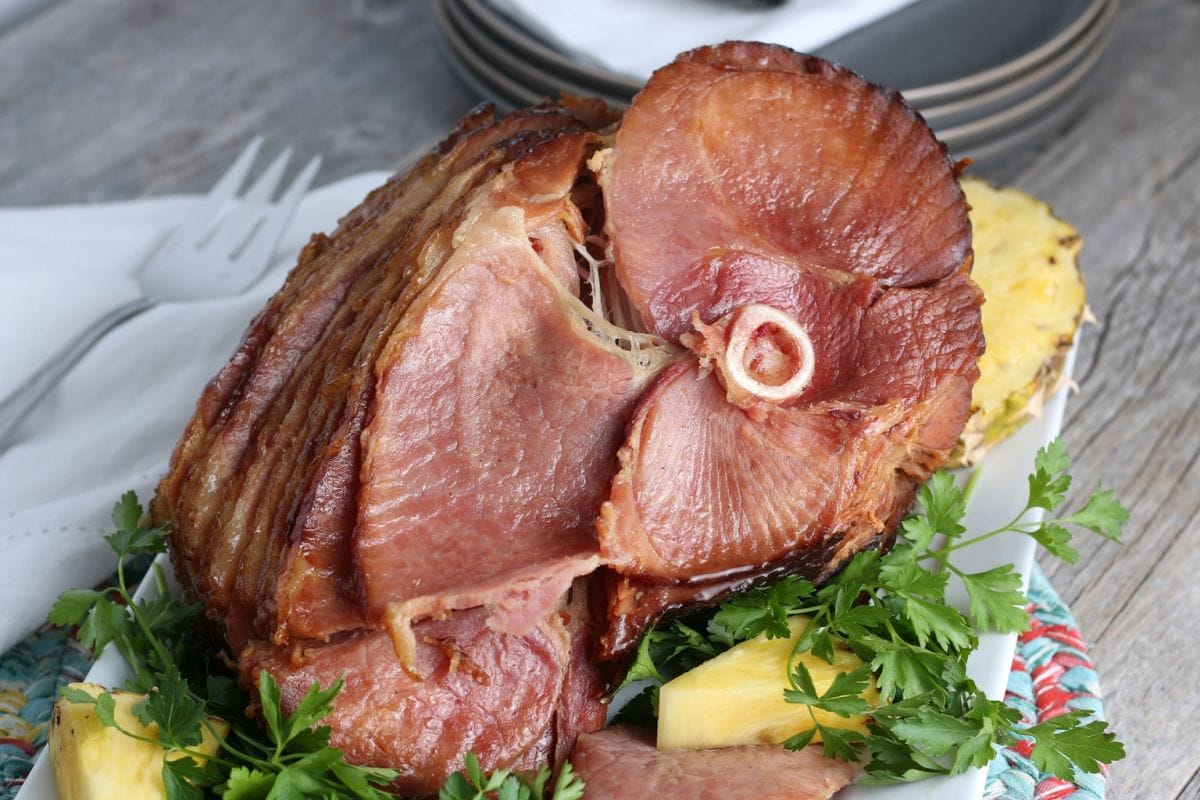 When you slow cook your ham, you allow the seasonings to marinate the meat for much longer than in a conventional oven or instant pot. The Life Family Fun slow cooker recipe cooks the ham on low for 3 – 4 hours, ensuring the pineapple slices and ground cloves completely penetrate the ham. 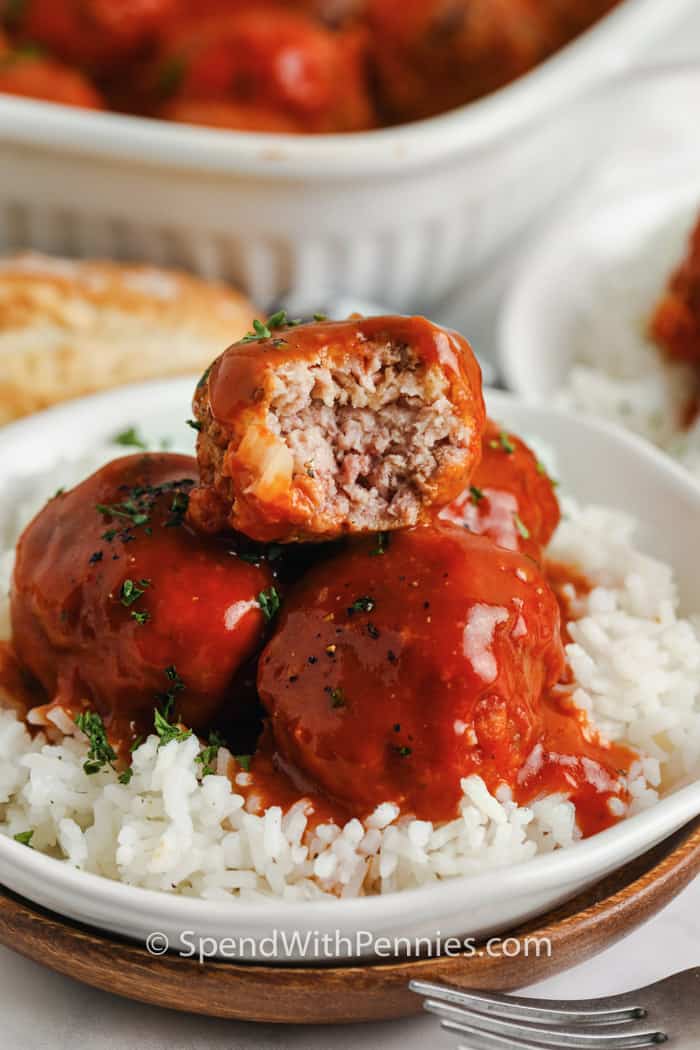 Ham balls can be paired with noodles and rice or eaten as a simple side dish. Spend With Pennies offers a delicious recipe for you to enjoy this holiday. 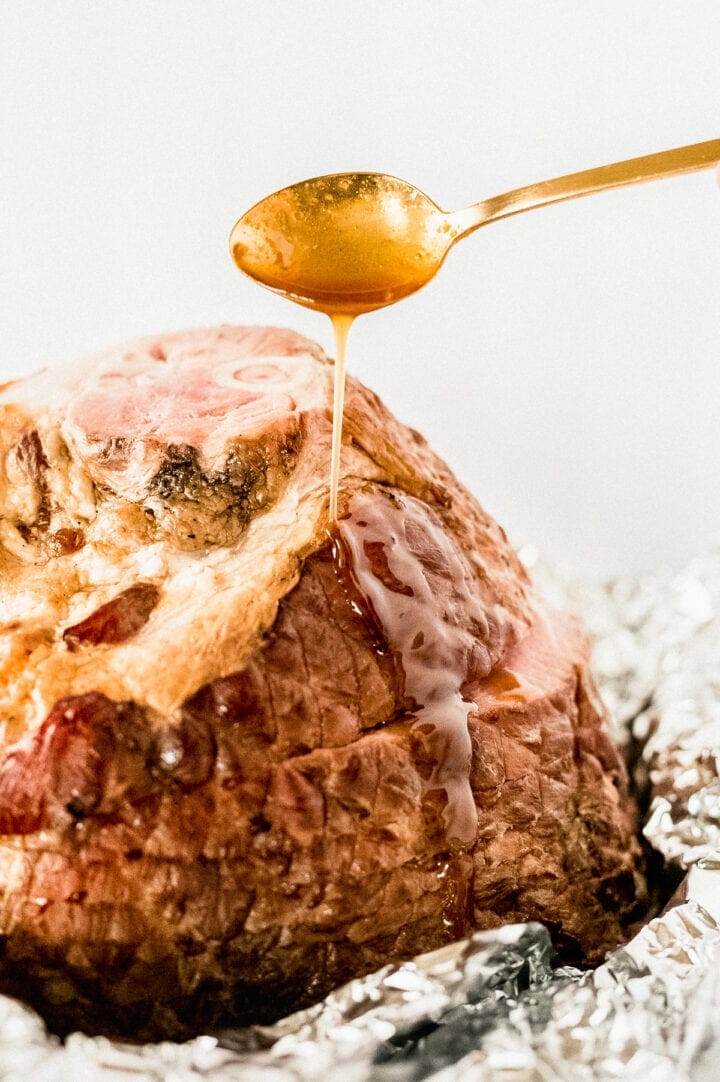 You can’t go wrong with a simple maple glaze for your Thanksgiving ham. The recipe found on Lively Table is made with only four ingredients, ham, brown sugar, maple syrup, and spicy brown mustard.

Ham and beans make for a delicious side dish for any meal. You can use any bean you like, but All Recipes recommends pairing your glazed ham with great northern beans. 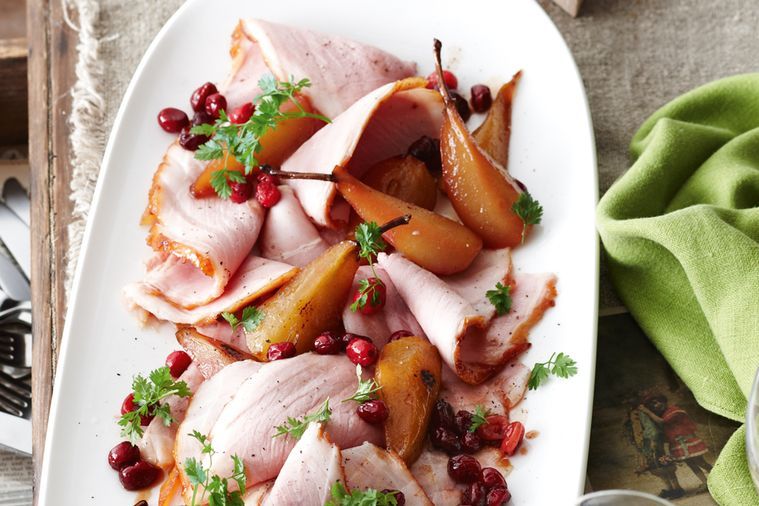 Sometimes, adding a bit of fruit to your sliced ham can brighten up your dish. Delicious has a spiced maple ham recipe with glazed pears that’s sure to impress your dinner guests. 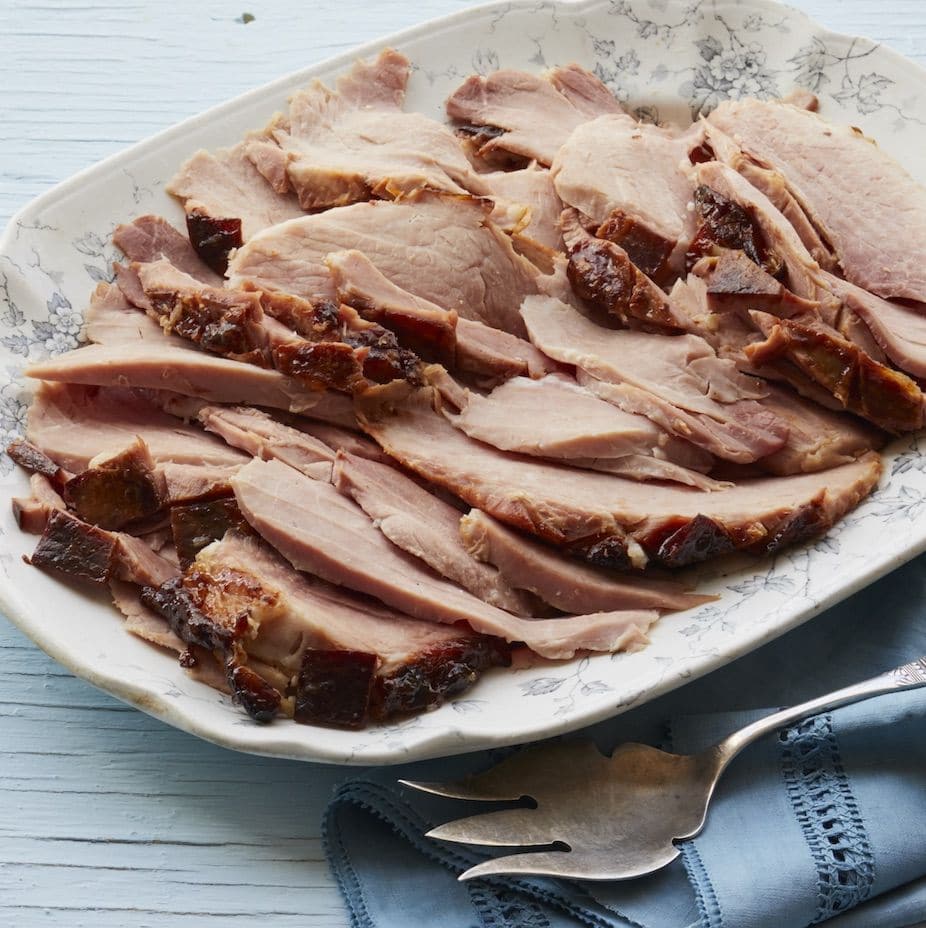 Did you know you can flavor your ham with soda? The Pioneer Woman has a Thanksgiving recipe that uses a can of root beer to add an interesting flavor to your meat. The recipe also calls for plum jelly for an extra dose of sweetness. 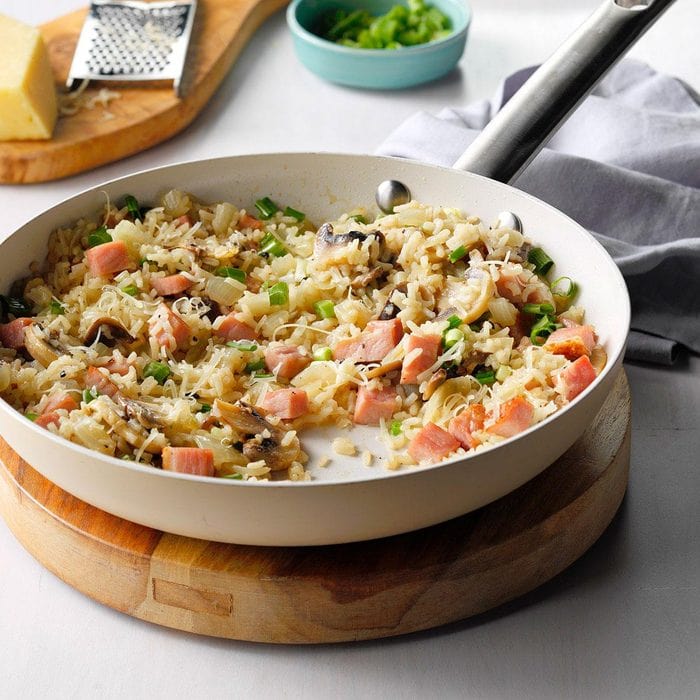 If you’re looking to add your ham to a full dish instead of eating it on its own, rice and veggies are the way to go. Taste of Home has a ham skillet and rice recipe that can be eaten as a main dish or on the side of the rest of your spread. 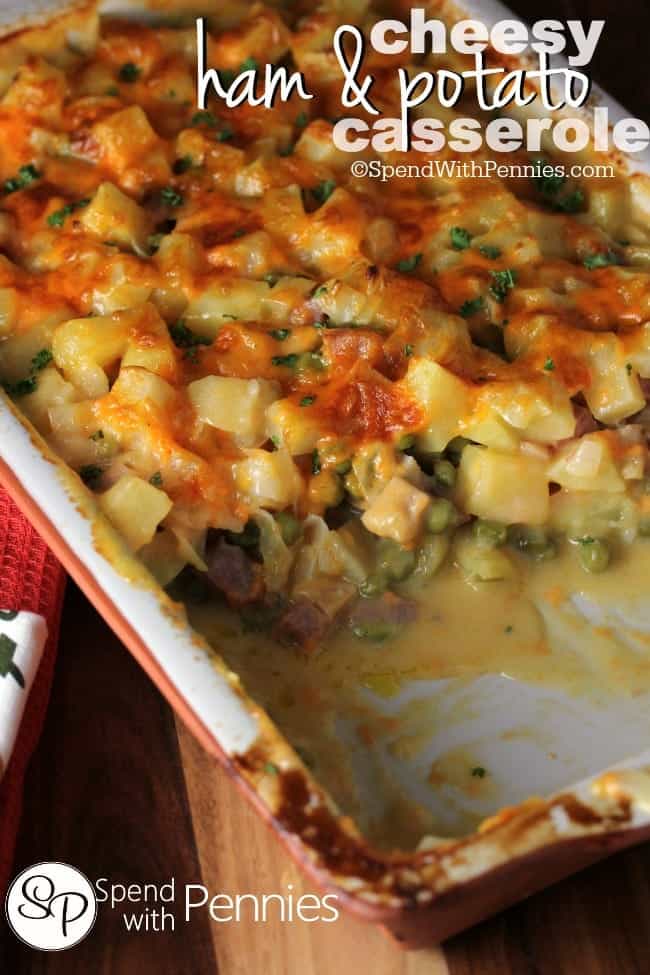 A casserole is an easy way to cook a large, filling meal without having to use the stovetop or cook in multiple pots and pans. The cheesy ham and potato casserole recipe at Spend With Pennies is packed with potatoes, ham, peas, and cheddar cheese. 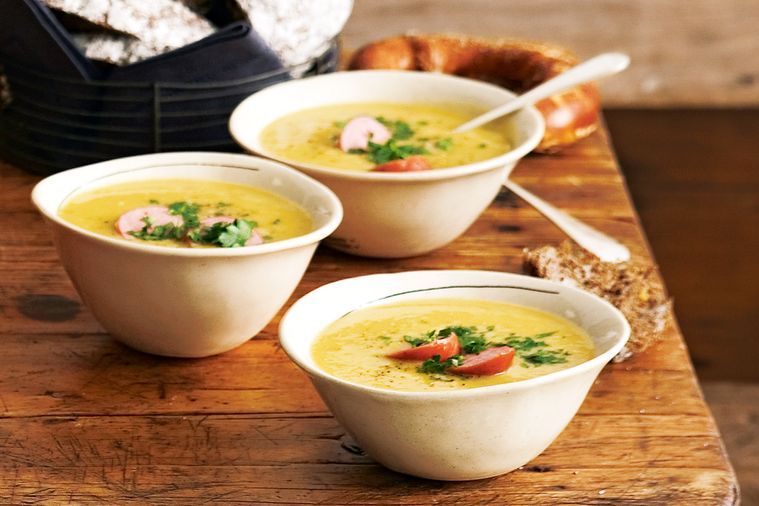 Soup is a warm and filling way to include ham on Thanksgiving. The pea, ham, and sausage soup recipe from Delicious is full of onion, broth, celery, bay leaves, and a hearty dose of sour cream. 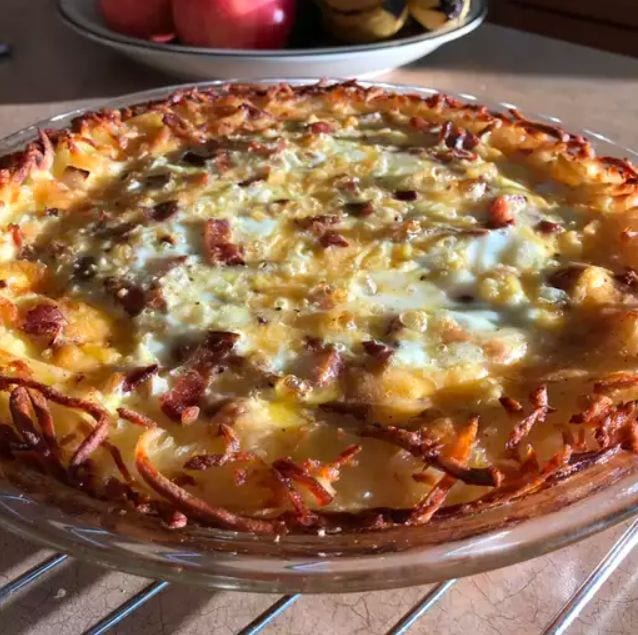 A quiche can be great for breakfast, lunch, or even dinner. Try the Ham Quiche recipe at All Recipes, which you can also bake and refrigerate for up to 2 days prior for your convenience. 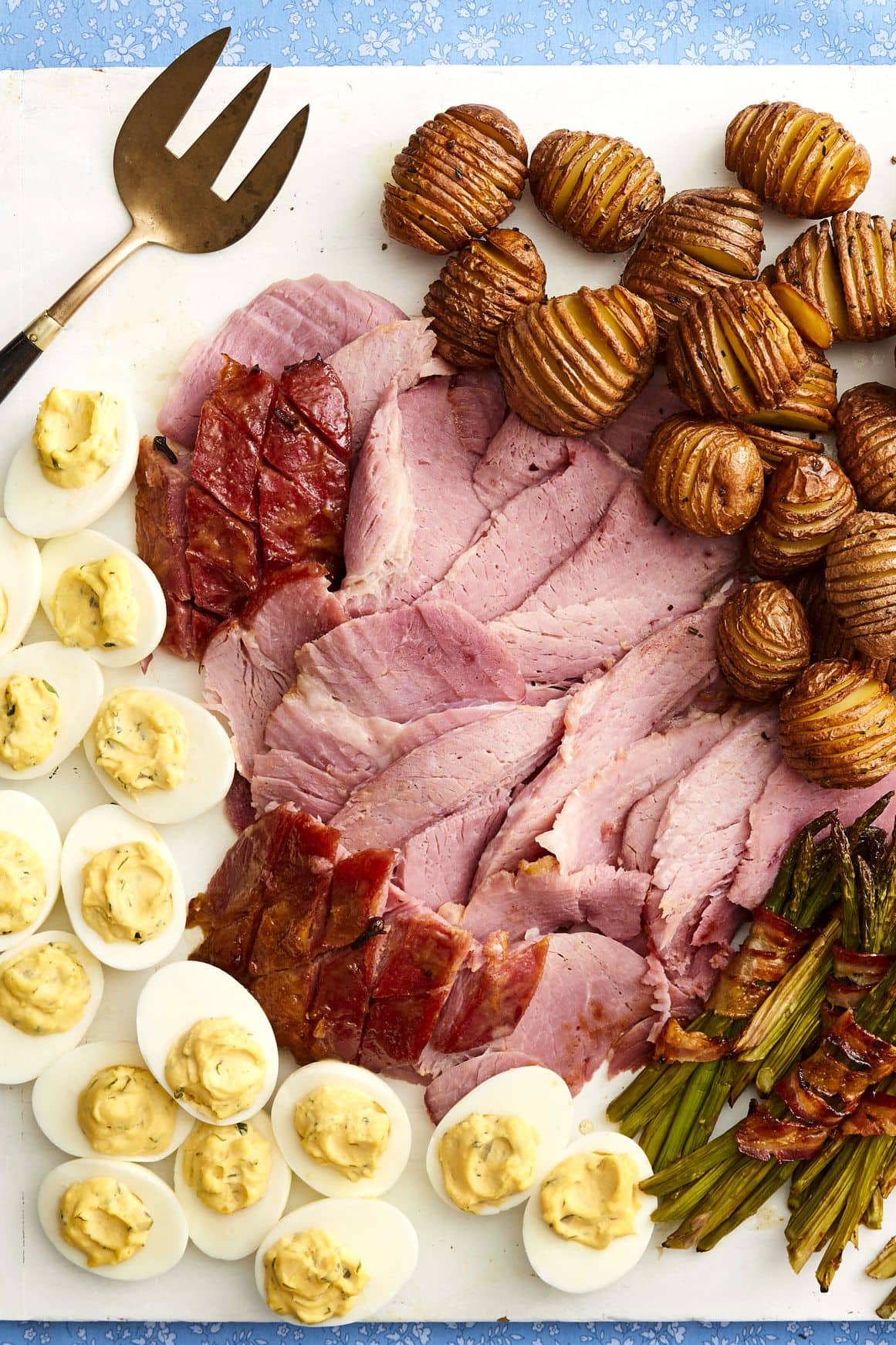 Experiment with your ham’s glaze this year. Try the Pioneer Woman recipe for a honey-mustard ham glaze; a nice contrast from a traditional brown sugar glazed recipe. 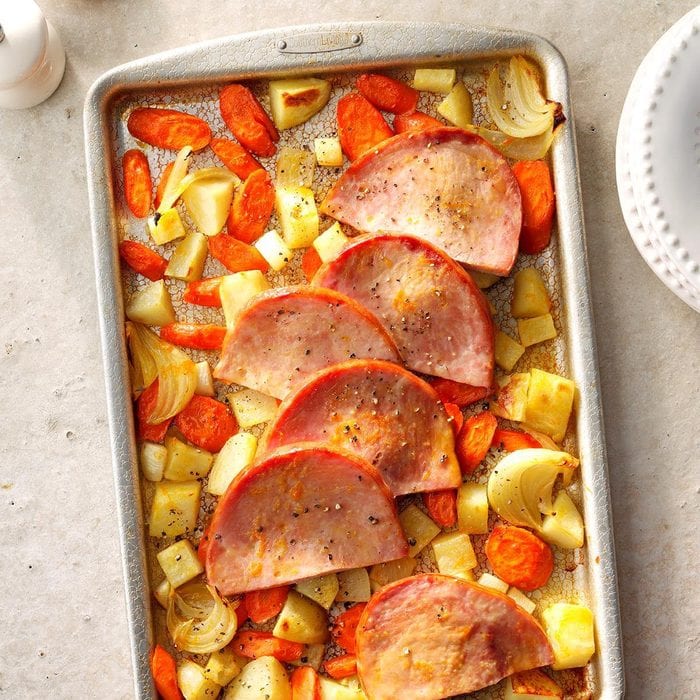 If you’re looking for a simple way to incorporate ham into your meal, Taste of Home has an easy recipe for you. All you have to do is chop up some carrots, potatoes, and onion, add a few slices of cured ham and bake to your liking. 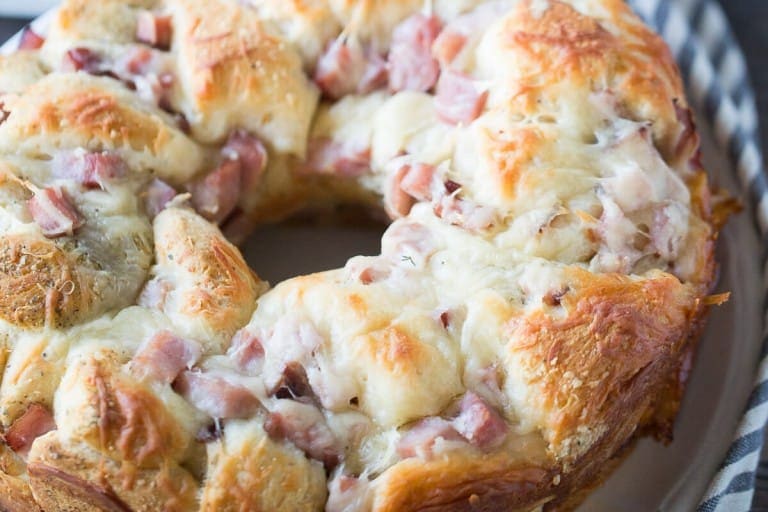 Monkey bread is a great choice for adding an interesting side to your dinner. You can include ham and swiss cheese into the mix by following a delicious bread recipe at Lemons for Lulu. 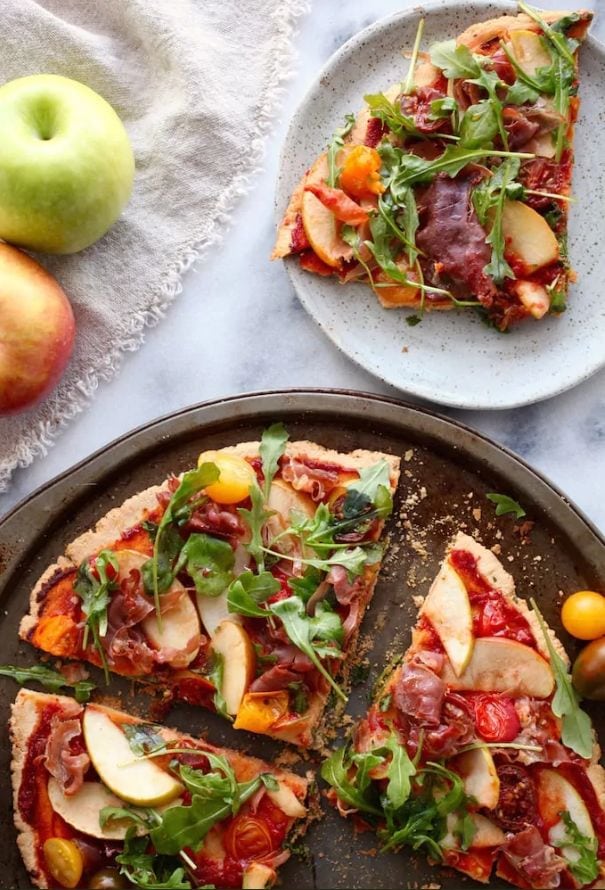 Yes, you can have pizza for your Thanksgiving meal, but you want it to be unique. For the perfect combination of salty, sweet, and crispy, try thissophisticated ham pizza recipe that will work great for a holiday. 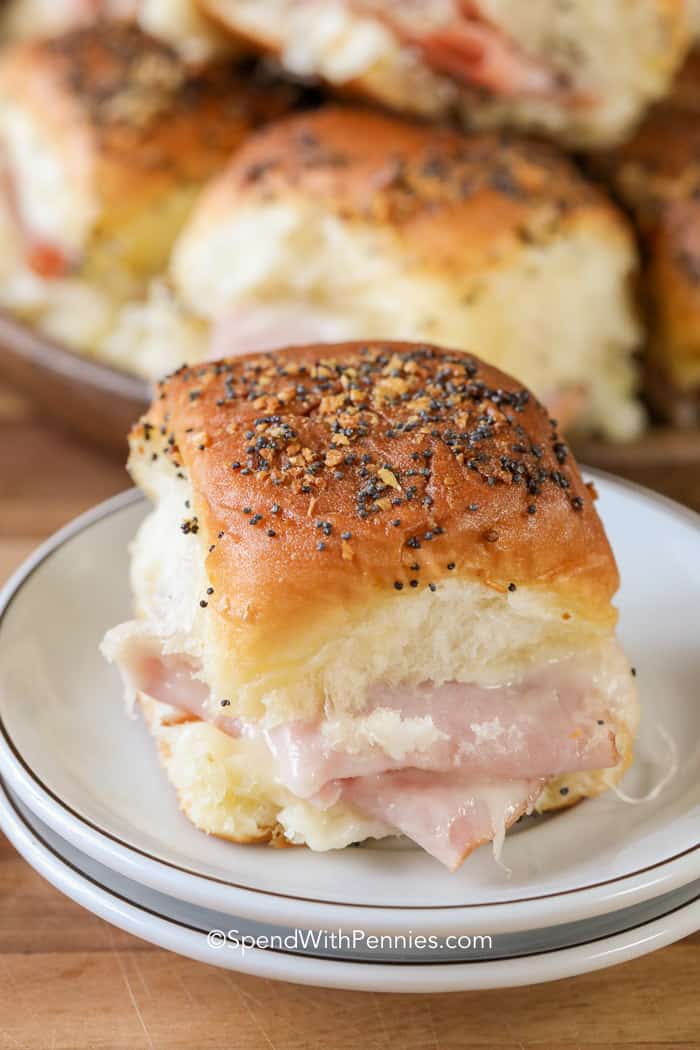 Sliders make for a tasty appetizer or side dish for your meal spread. The ham and cheese sliders at Spend With Pennies are a simple way to enjoy ham covered in melted swiss cheese. 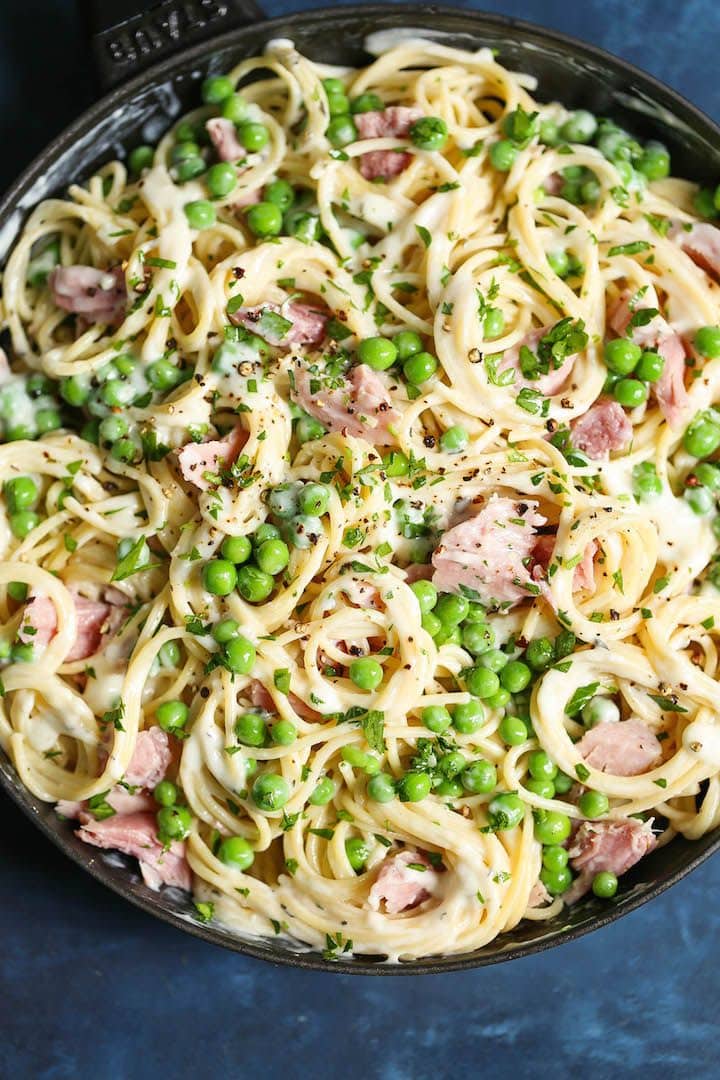 Why not enjoy a healthy portion of pasta this Thanksgiving? The recipe found as Damn Delicious makes for creamy pasta full of ham, peas, and garlic.

Which is Better Boneless or Bone-in Ham?

Whether or not you want to use a boneless or bone-in ham for your Thanksgiving ham recipes depends on your preference for flavor and the type of cut you want for your end results. A boneless ham will cook quicker than a bone-in, and you’ll be able to cut it more consistently once it’s finished.

If you’re looking for uniform slices or want to add even pieces of ham to another dish once it’s cooked, a boneless ham may be best. Bone-in hams allow for better absorption of flavor because the meat cooks at a slower pace and allows for more flavor absorption.

The overall texture of the meat may be more desirable as well due to the effect the bones create within the ham once cooked.

How Many Pounds of Ham Do You Need Per Person?

A half pound of ham per person is preferred for bone-in ham. For boneless, you may only need ⅓ pound per person. It’s always best to overestimate, so you can use any leftover ham for future recipes.

Should Ham Be Boiled Before Baking?

Boiling ham before baking can help to make the meat more tender and juicy. This is because the boiling process breaks down some of the tough muscle fibers.

Additionally, boiling helps to remove any unwanted saltiness from the ham. Many people find that baked ham has plenty of flavor without boiling it first.

It’s up to you whether or not you want to boil your ham before baking it. If you’re looking for a hydrated ham, you may not want to skip this step.

What Brands of Ham are the Best for Thanksgiving?

Can You Freeze Leftover Ham?

When thawing, make sure to thaw the ham in the refrigerator overnight. This will help to keep the ham from drying out.

Ham is a staple for many people’s holiday dinners. It is a versatile meat that pairs well with a variety of dishes. You can eat ham for breakfast, lunch, dinner, or all three. Then you can use your leftover ham for other dishes. Whether you’re looking for a tasty side or a main dish, use this list of the best Thanksgiving ham recipes for a delicious meal and try cooking something new this year.