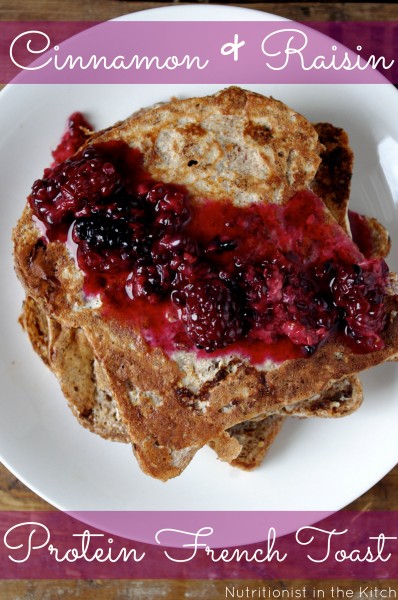 I couldn’t even tell you how long it had been since I’d had French Toast! Thanks to a wonderful NITK reader/Facebook fan I have brought this delicious breakfast back into my life, BUT in a totally different way!

This version of French Toast is clean, mean, filled with proteeein, and incredibly delicious. I’ve been tempted to make this every single morning for the past week now!! But.. because I still really love my protein pancakes and overnight oats.. I do a nice little rotation now!

A little while ago on Facebook I asked what people typically enjoyed eating for breakfast/brunch on the weekends. One wonderful reader mentioned Cinnamon Raisin French Toast! The Ezekial 4:9 brand in particular. I was already pretty familiar with Ezekial brand bread, but I hadn’t yet tried the Cinnamon Raisin.

A sublte hint of cinnamon, mixed with hearty grains and seeds, and speckles of raisins throughout. The smell alone was enough to make my heart flutter when I opened the bag.

What I love most about this bread…. NO CRAP! 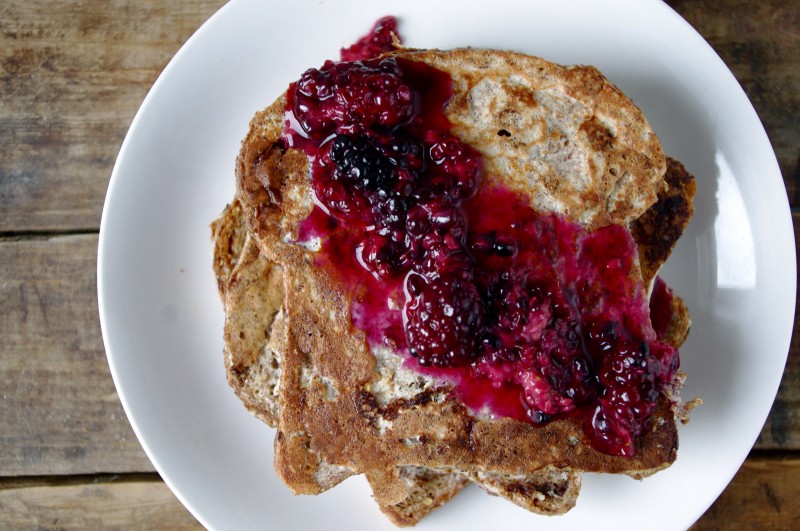 Honestly, pretty much a majority of packaged breads out there, even the bakery ones are filled with sugar, corn syrup, hydrogenated oils, preservatives.. and other junk.

Now, here’s where the fun comes in!

I definitely wanted to do French Toast, but I wanted to figure out how I could keep this breakfast as healthy as possible and also add some balance by bringing in protein. So I pulled out my trusty, couldn’t-live-without-it, North Coast Naturals vanilla Iso-Protein and started experimenting.

In a bowl I mixed together what I planned to dredge the cinnamon raisin bread in. I used protein powder, egg whites, almond milk, and of course, because I must have this every morning… ground flaxseed! Oh, and a little more cinnamon just for good measure! 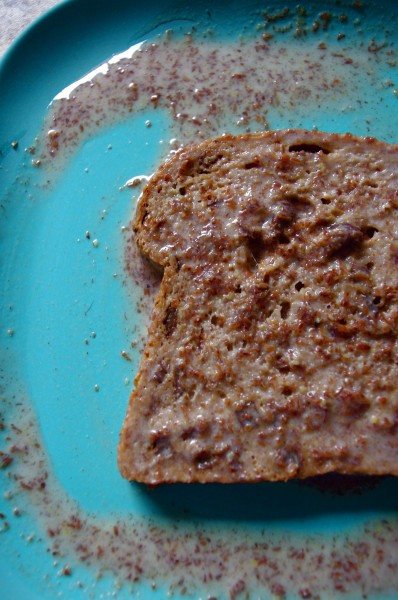 The reader who recommended this delicious dish gave me a heads up that this bread is pretty dense so it needs a little time to soak up all of the egg mixture.

It does, about a minute or two, but then when it cooks, the whole piece of bread puffs up and pretty much doubles in size and density, so one piece is super filling!

In the pan the toast went, and when I flipped it for the first time… aaaah, just beauty! A golden, eggy, partly crispy, partly soft crust on the outside of the delicious cinnamon raisin bread!

Oh, and the smell… divine!

The last thing I felt this delicious breakfast needed was the sweetness of some berries. I heated up some fresh blackberries then mashed them in a bowl and poured it over the protein-packed Cinnamon Raisin French Toast.

Is this real life? 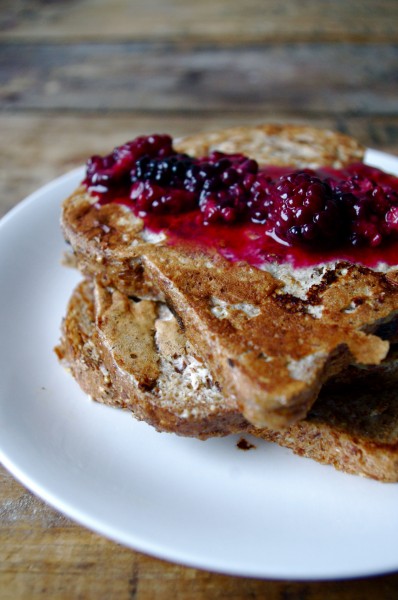 Let’s just look at a couple more pictures of this healthy deliciousness, and smile…

You… yes you, need to make this. 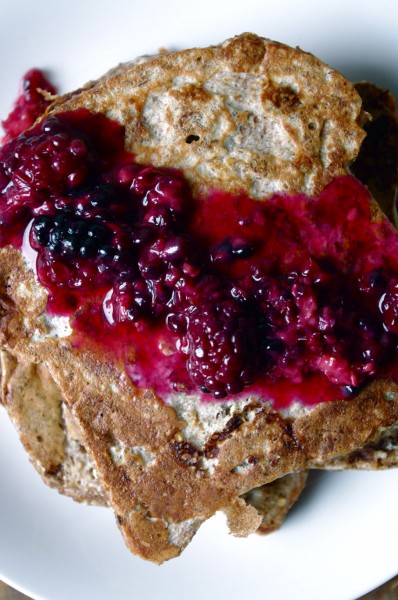 Oh, and those of you with a gluten allergy or intolerance… I haven’t forgotten about you! You can most definitely substitute a gluten free Cinnamon Raisin bread!

I’ve got a great workout for you too!

The other day at the gym, my super awesome and inspiring bestie Brooke introduced me to this Tabata workout routine. We sweated (?? is that a word) our way through the intense 9 minute routine, and totally pushed each other to get through!

It was so much fun!

I’ve done HIIT before and loved it, but I LOVE the 20 seconds ON 10 seconds REST interval sequence with Tabata. It really allows you to give it your all in each burst of exercise!

So without further adieu…

(I’m not sure why this image turned out so small 🙁 Hopefully you can all still read my writing, or are able to print it off!)

You’ve got to give this one a try, you’ll love it. AND you’ll TORCH calories for hours after!!

Oh…before I forget! I’ve had readers asking wether I have an instagram account or not. I’ve had my personal one for a long time and I often post pictures of my food, recipes, and other health related things on it (but please note, I also post pictures on anything else going on in my life.. so it’s not all food, just a heads up!!) … if you’d like to follow …go the link to my instagram page here! – I’ve also added an instagram button under the “connect” in the sidebar!

Have a wonderful weekend!

Nutrition in the Kitch