Donuts are a delicious treat any time of day, but it can be hard to find commercially-made gluten-free donuts. Thankfully, there are plenty of delicious gluten-free donut recipes that can allow you to reproduce your favorite donut flavors without gluten. 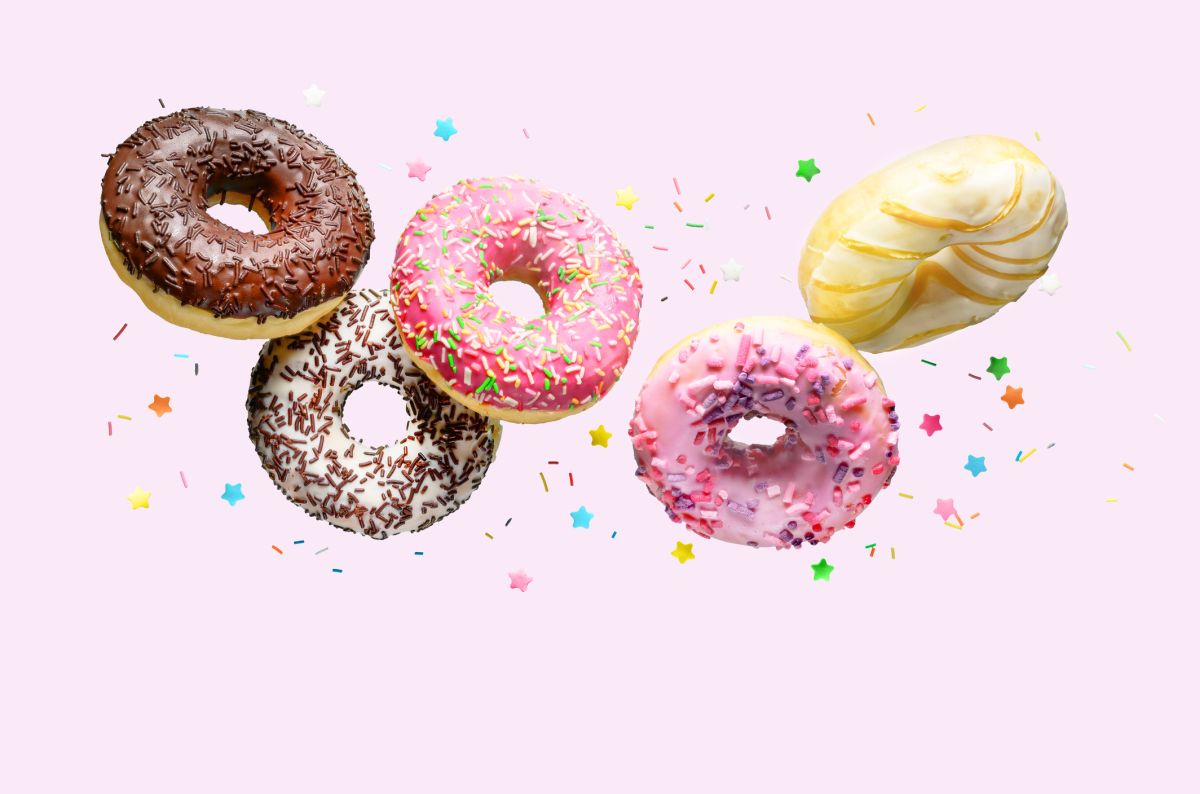 Why Would Someone Need Gluten-Free Donuts?

Gluten-free products cater to people who can’t eat gluten, a series of proteins found in bread, wheat, pasta, cereal, and other baked goods.

Minor gluten allergies or intolerance can lead to bloating, abdominal pain, diarrhea, and other negative symptoms. More severe gluten allergies, known as celiac disease, can result in intestinal damage if gluten is eaten.

Gluten-free donuts are made out of gluten-free alternative flours and other gluten-free binders that can keep the donuts moist and delicious without including traditional wheat-based flours. However, if they don’t contain flour, what exactly goes into gluten-free donuts?

If you’re new to baking gluten-free donuts, using a pre-made gluten-free flour blend can go a long way towards helping you bake with consistent results.

Other than the difference in flours, making gluten-free donuts isn’t that different from making traditional baked or fried donuts.

Here are a few tips that can help you get the most out of your homemade gluten-free donut recipes:

No matter which gluten-free donut recipe you use, it’s a good idea to read the recipe thoroughly at least twice before gathering ingredients.

In fact, this will help you figure out how to pace the recipe. Moreover, it will prevent you from accidentally forgetting a step or ingredient in the process.

How to Make Gluten-Free Donuts From Scratch

Each gluten-free donut recipe you attempt will be slightly different. However, they all share the same basic steps.

Thus, having a strong knowledge of these steps can help you learn how to make successful donuts no matter which recipe you use.

These are the steps you should follow to make gluten-free donuts from scratch:

20 Gluten-Free Donuts for a Decadent Snack 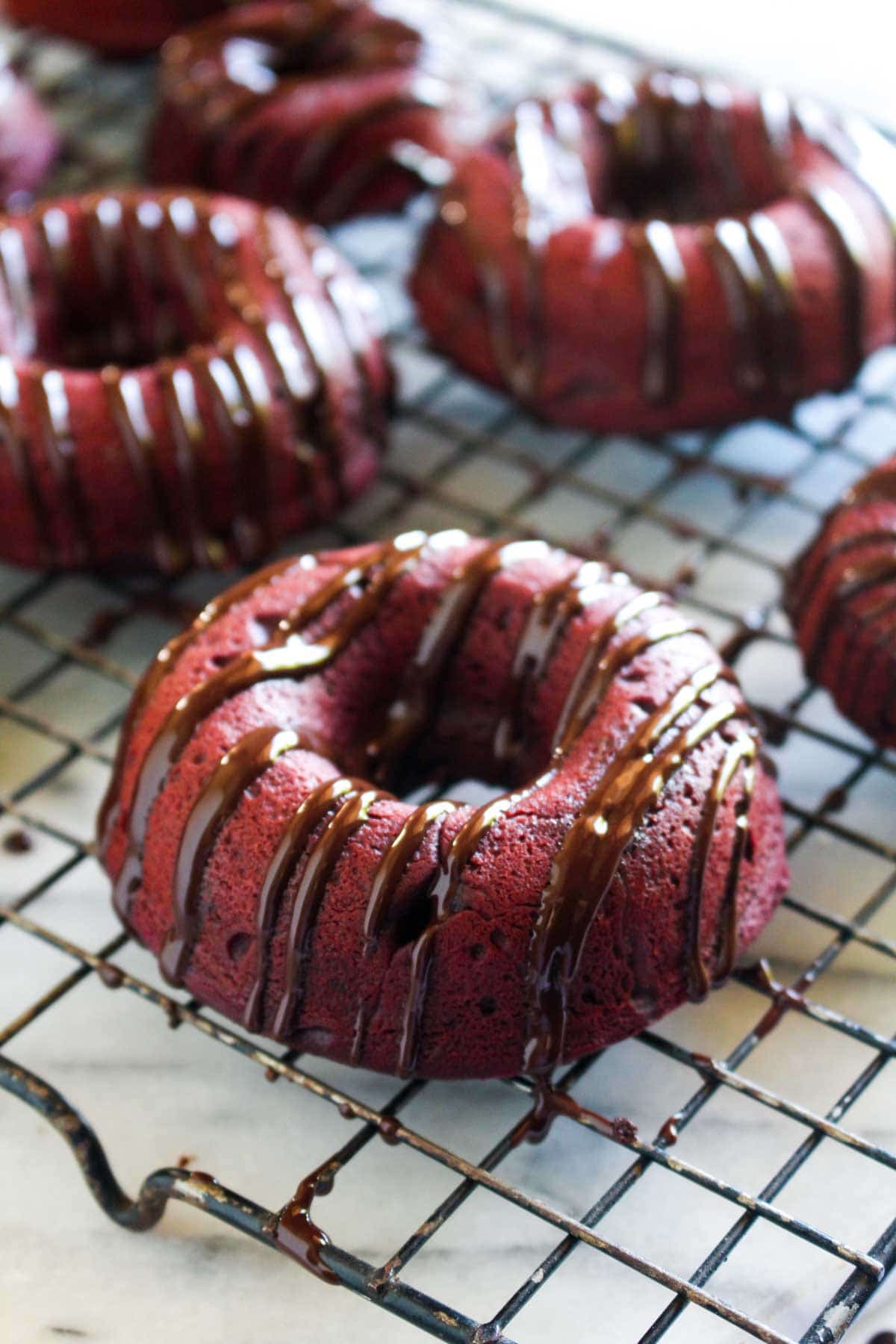 Beets might seem like an odd combination with chocolate in these rich gluten-free baked donuts from Darn Good Veggies. But don’t be scared off. The beets give these donuts a beautiful red velvet color and moist, soft texture that complements the chocolate in them well. 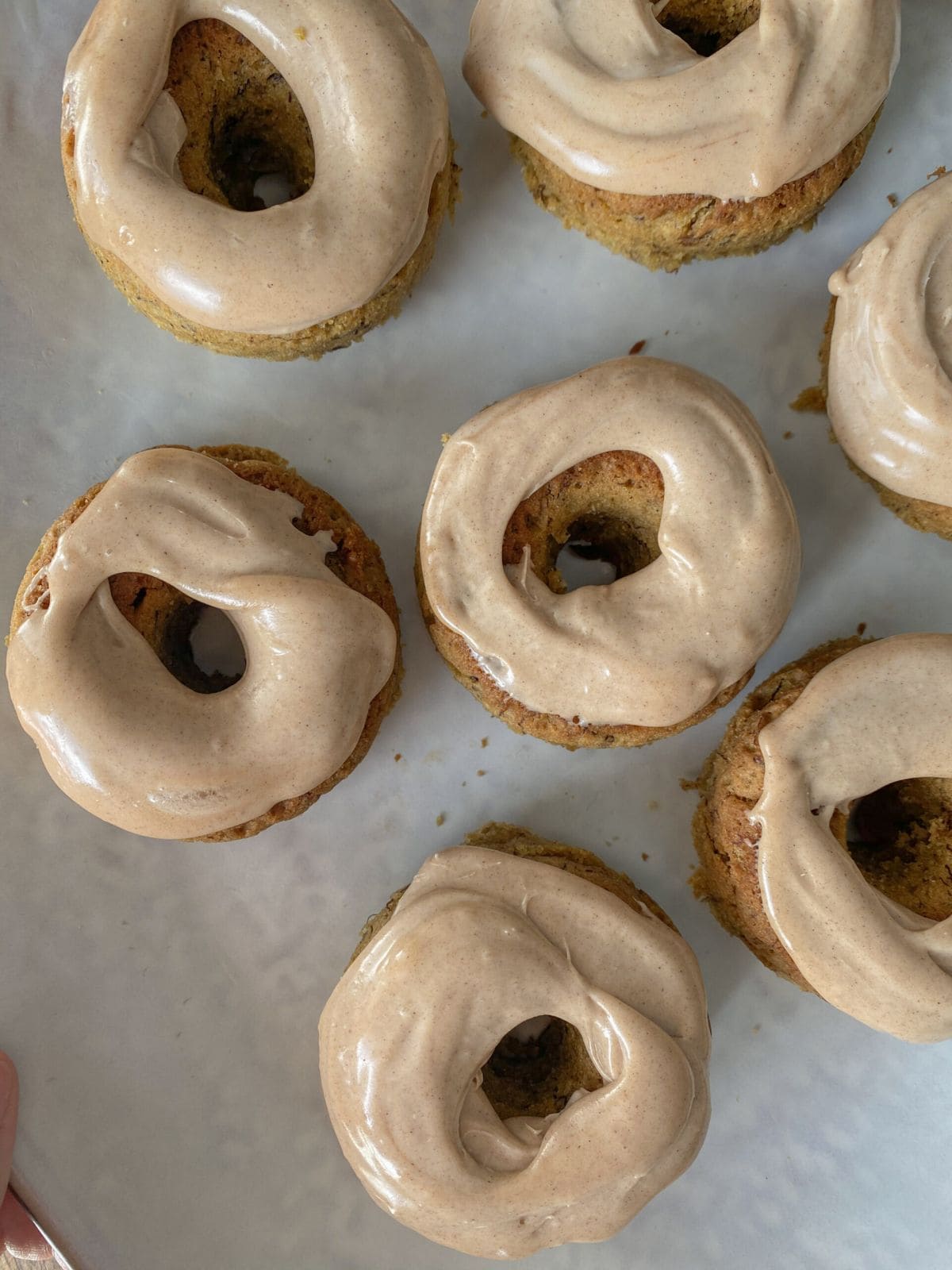 Banana bread is a practical way to use up overripe bananas in your kitchen, and these vegan gluten-free banana bread donuts at Peanut Butter and Jilly are no exception.

This recipe replaces egg with flax seed and oat or almond milk for dairy to keep these donuts light and healthy. 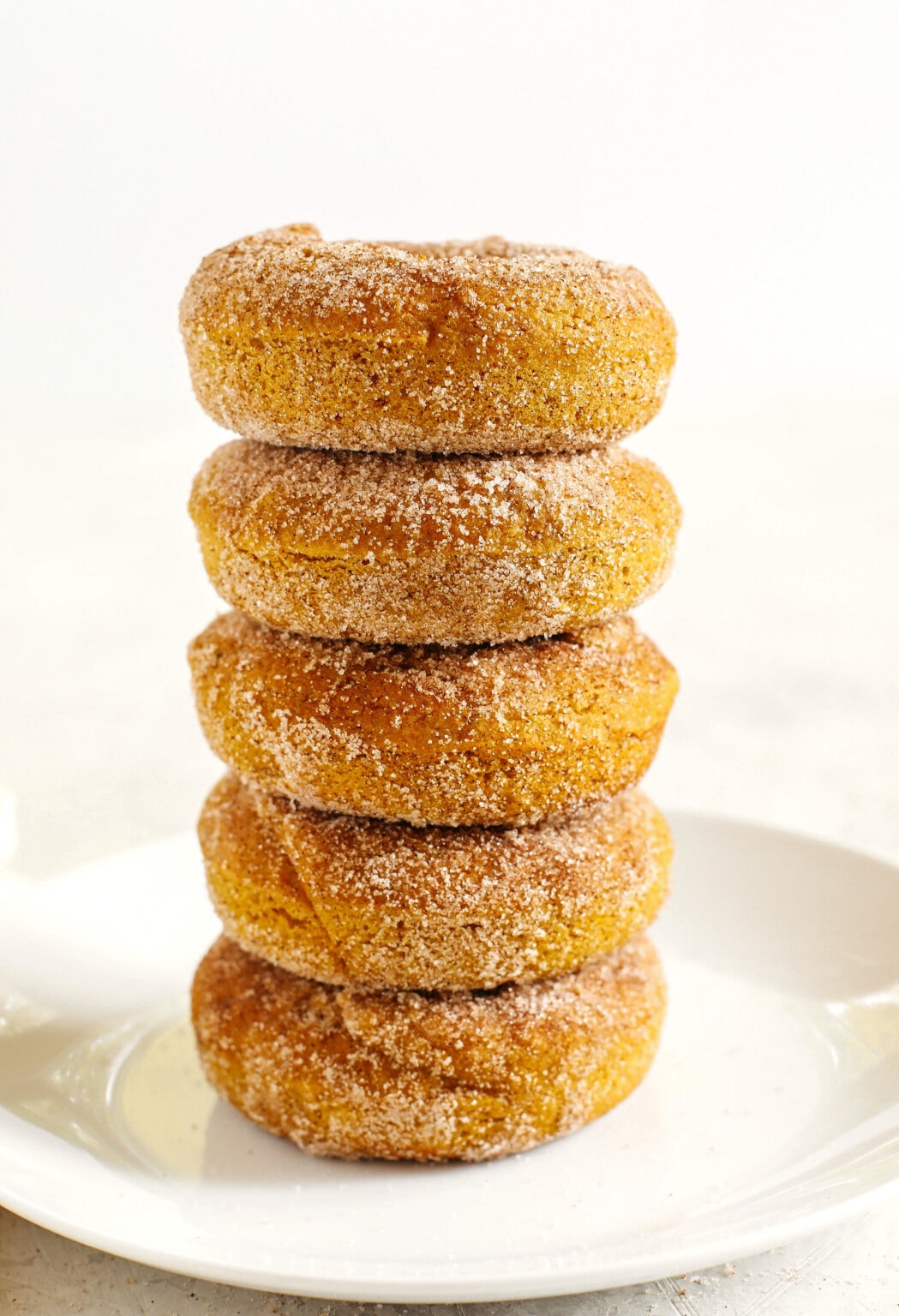 If you’re looking for some gluten-free donuts filled with warm spices and sweet traces of maple syrup, look no further than these gluten-free pumpkin spice donuts at Eat Yourself Skinny.

The fall flavors in these donuts are a delicious match for your next autumn brunch or bake sale. 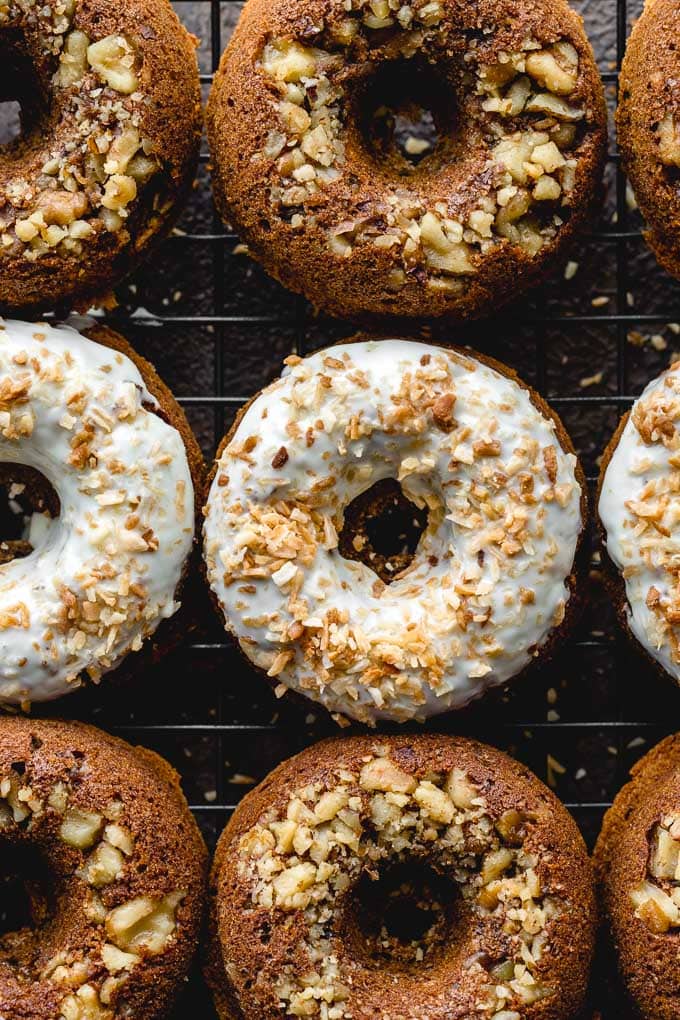 For another gluten-free donut recipe that is full of warm spices such as ginger, nutmeg, and cinnamon, check out these carrot cake protein donuts from Crumbtop Baking.

Not only do these donuts include applesauce as a binder for reduced sugar, but they also have a vanilla-flavored protein powder that make them a healthy addition to any breakfast table. 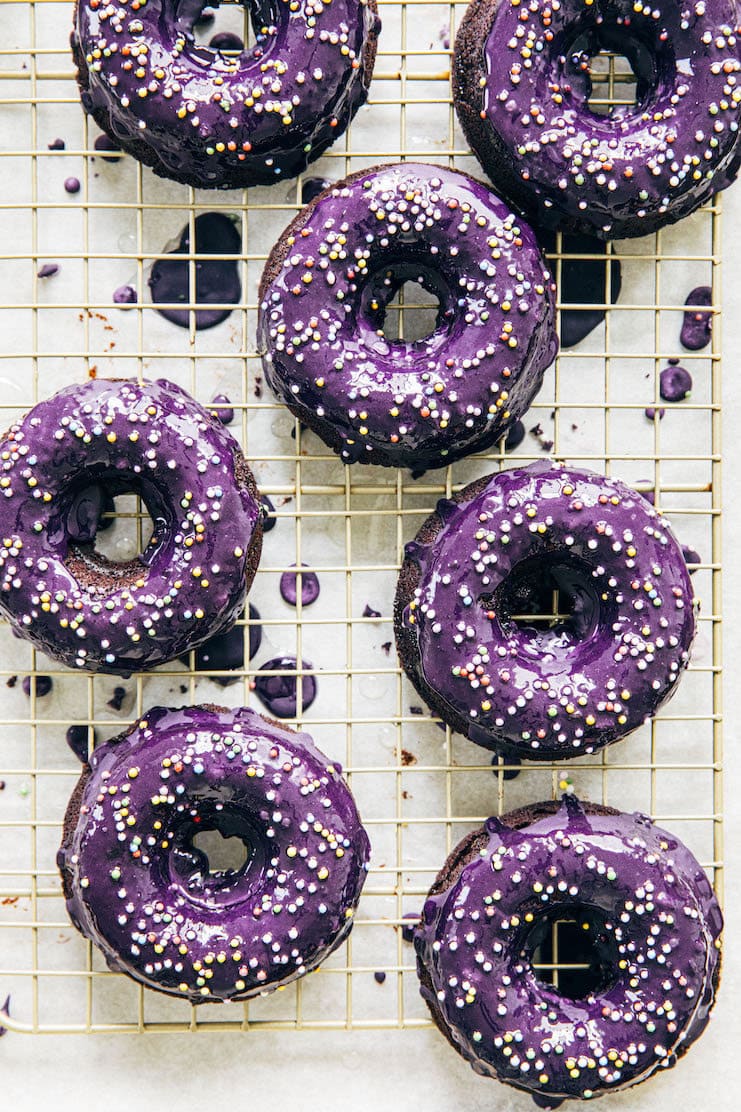 Looking for an unusual donut recipe? The ube mochi donuts at Hummingbird High feature a deep purple glaze and a mochi dough made of sweet rice flour. In other words, they definitely stand out from more traditional donut recipes.

Ube is a sweet potato-like root with a flavor that falls somewhere between pistachio and vanilla. 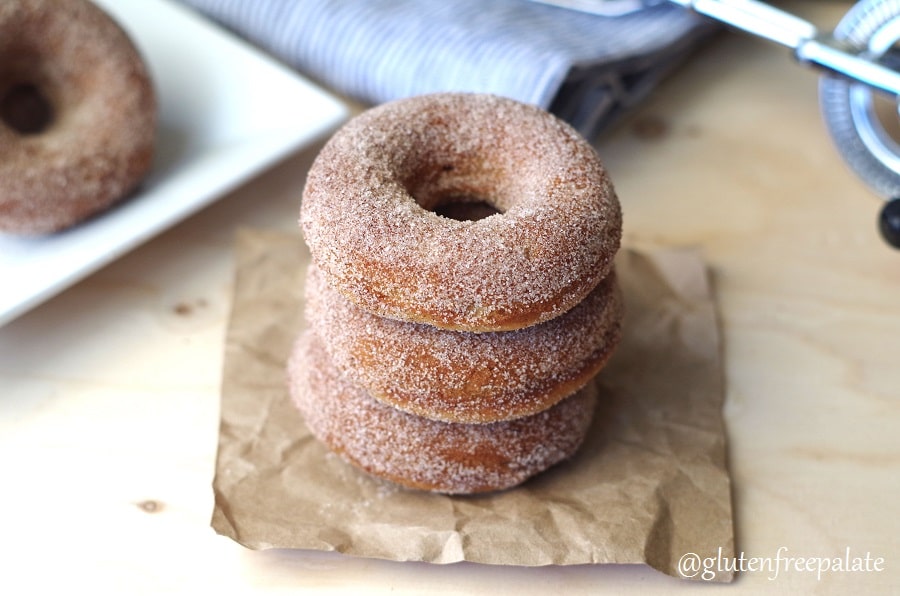 Cinnamon sugar is a traditional donut flavor that is easy to replicate with a gluten-free recipe. This version at Gluten-Free Palate is also dairy-free and nut-free for a safe and healthy donut that avoids all major allergens. 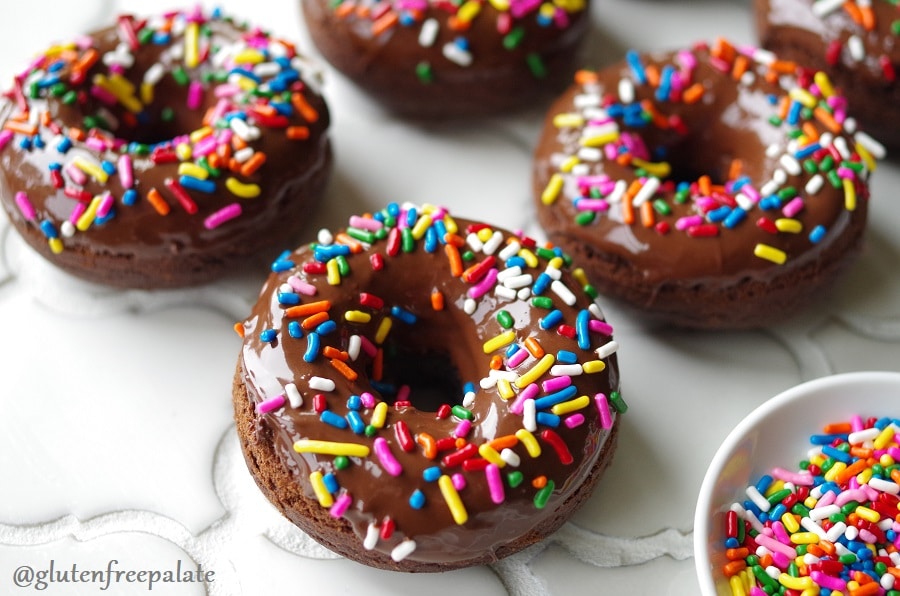 Here’s another gluten-free donut recipe at Gluten-Free Palate that includes a classic donut combination: chocolate and sprinkles. These chocolate donuts include a chocolate glaze. In fact, they are also sweet enough to be served plain if you want a lighter version. 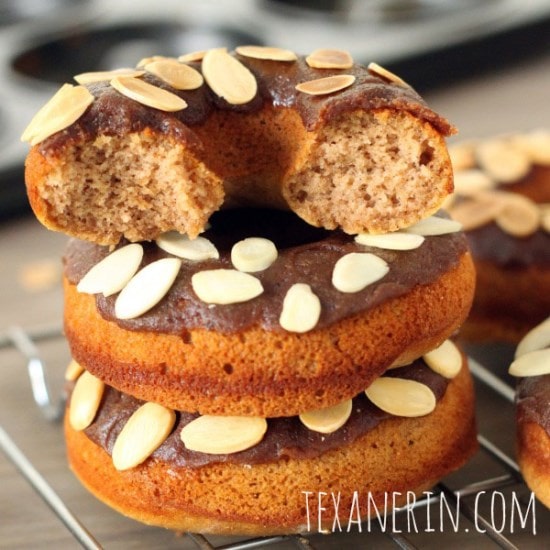 If you want a different twist on cinnamon donuts than the cinnamon sugar version, try these cinnamon roll donuts from Texanerin Baking.

These donuts are also dairy-free and grain-free. Therefore, they’re a much healthier substitute for traditional wheat-based cinnamon rolls. 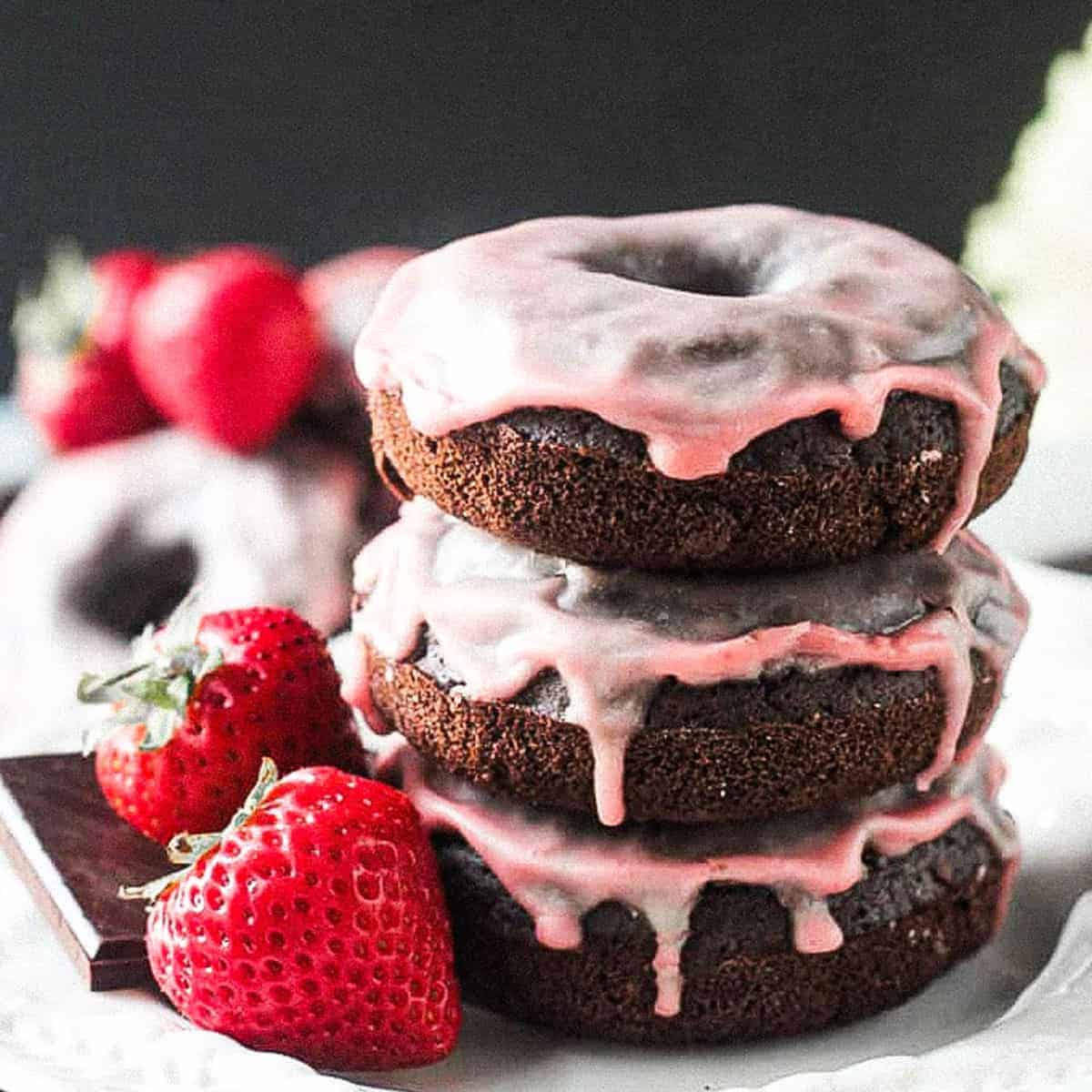 Chocolate and strawberries are a match made in heaven, and the pink strawberry glaze on these chocolate vegan donuts at Veggie Inspired make them a beautiful addition to your brunch spread.

Blending fresh strawberries with powdered sugar gives the donuts a delicious fruit flavor that helps cut the richness of the soft chocolate cake. 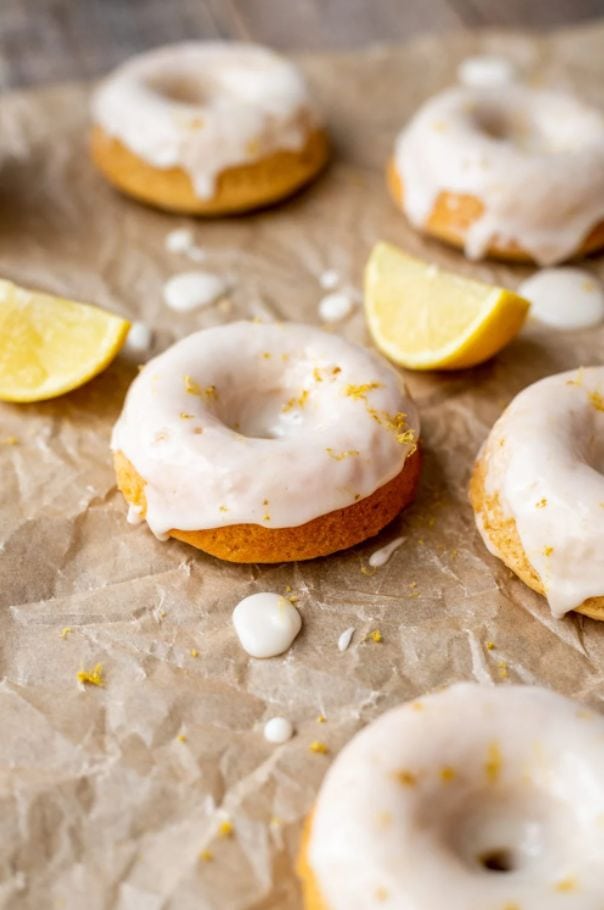 Lemon-flavored donuts are a delicious variety to bake in the spring when lemons are in the peak of their season, and the gluten-free lemon mochi donuts at Cooking Therapy are the best combination of tartness, sweetness, and acidic brightness. 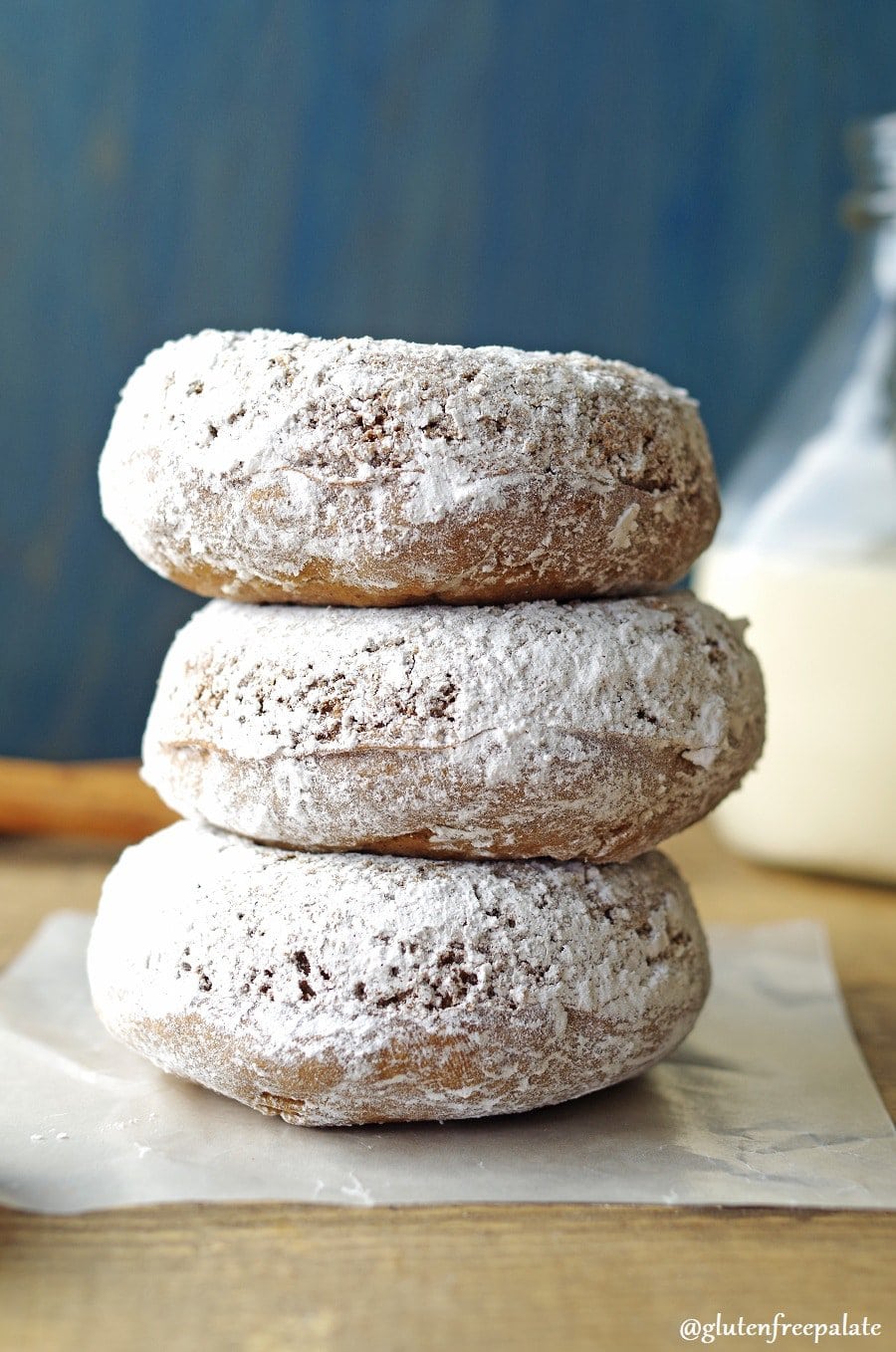 Spice donuts are popular year-round, and they’re a nice switch from more common donut flavors like chocolate and vanilla. Make these gluten-free gingerbread donuts from Gluten-Free Palate for a sweet Christmas treat that will stand up well against more savory holiday breakfast options. 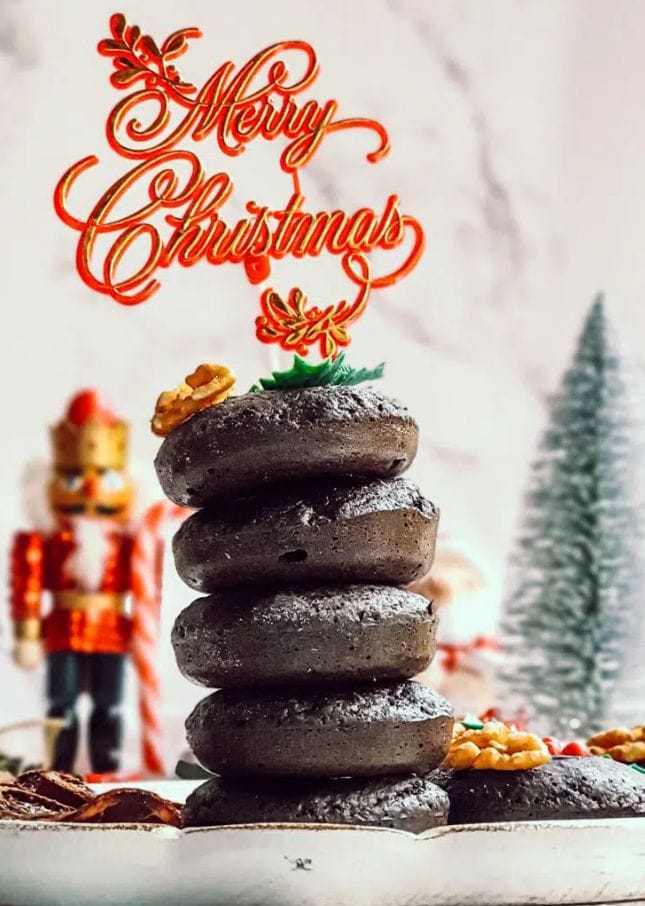 Another gorgeous Christmas donut that also happens to be gluten-free are these negra torta chocolate cupcakes at I Karolina.

These donuts are chock full of chocolate and fruit flavors, and are based on a classic Veneuzalan cake featuring cranberries, raisins, dates, oranges, almonds, hazelnuts, walnuts, and pistachios. 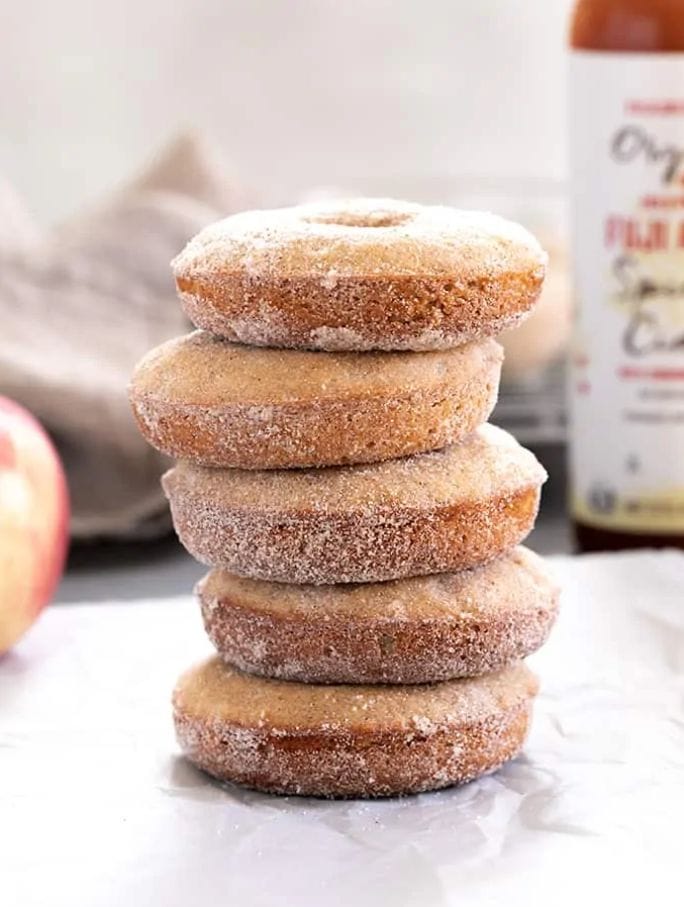 Going to the apple orchard to pick apples can be a great time until you realize that you can’t eat any of the apple cider donuts they feature at the food stand.

Thankfully, this gluten-free apple cider donut recipe at Gluten-Free on a Shoestring has you covered. These soft, fluffy donuts use either apple cider or apple juice to give them unforgettable fall flavor. 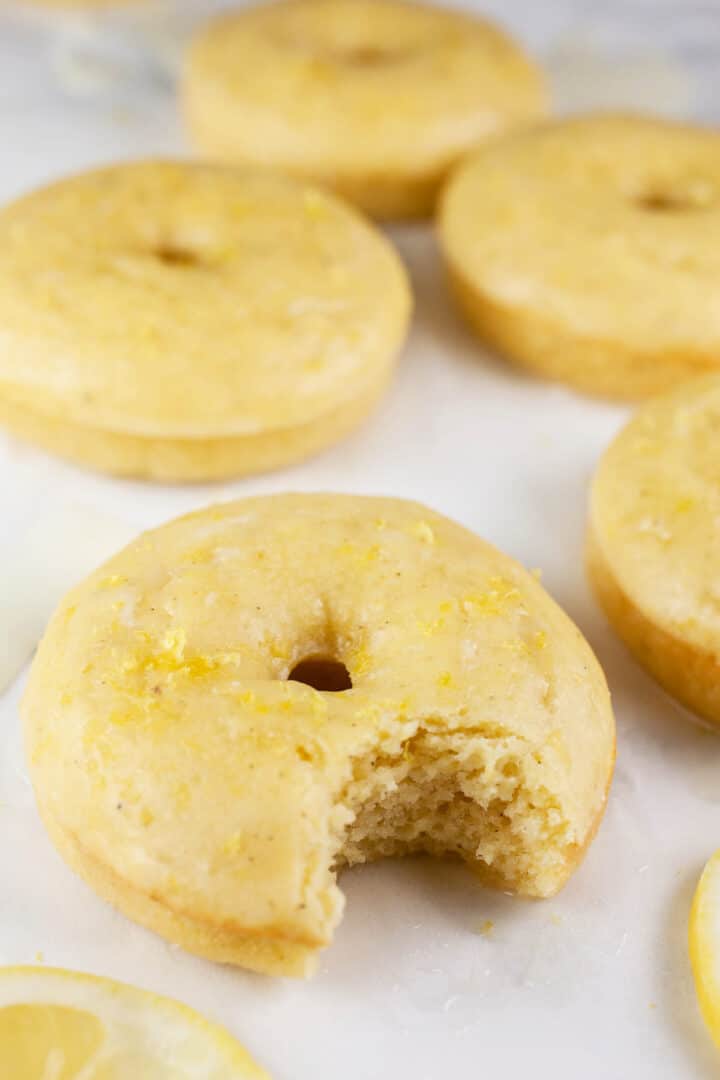 Here’s another lemon-flavored gluten-free donut recipe, this one from The Rustic Foodie. Rather than using sweet rice flour like in mochi lemon donuts, these lemon donuts feature a commercial 1-to-1 gluten flour blend instead. 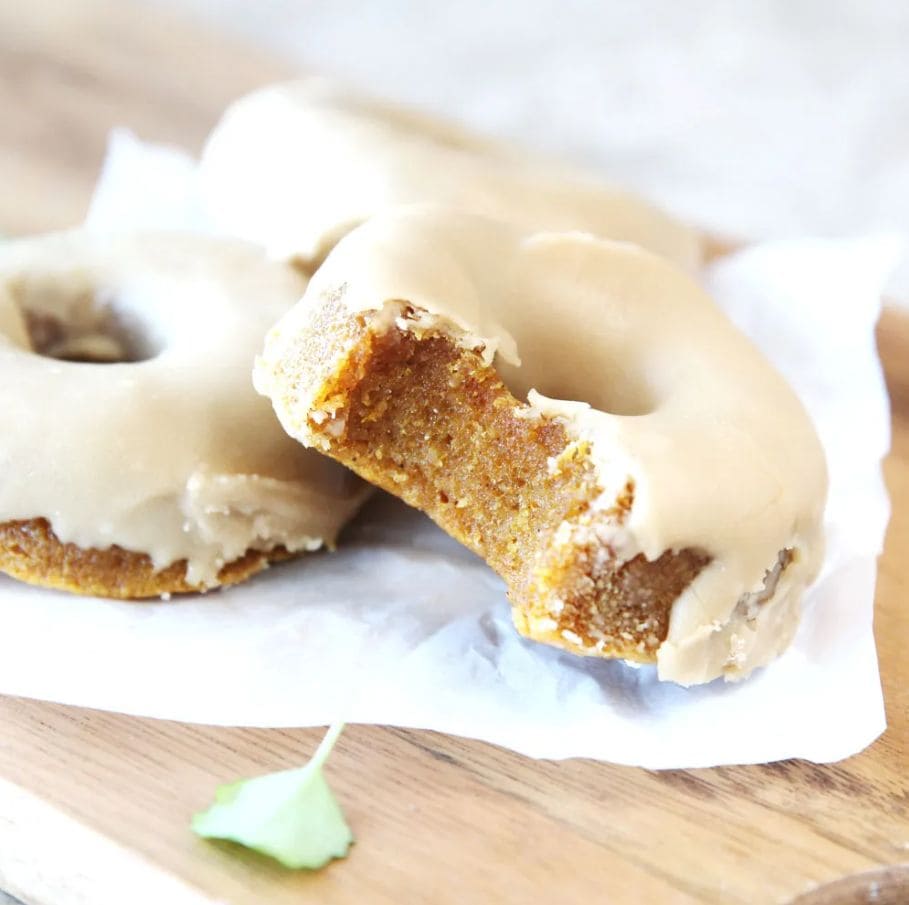 These baked rice flour donuts at All Purpose Veggies are flavored with pumpkin puree and a glaze made from powdered sugar and maple extract for sweet fall flavors you’ll crave year-round.

These donuts can also be made with different flavored extracts for a change if you prefer almond, vanilla, lemon, or orange flavors. 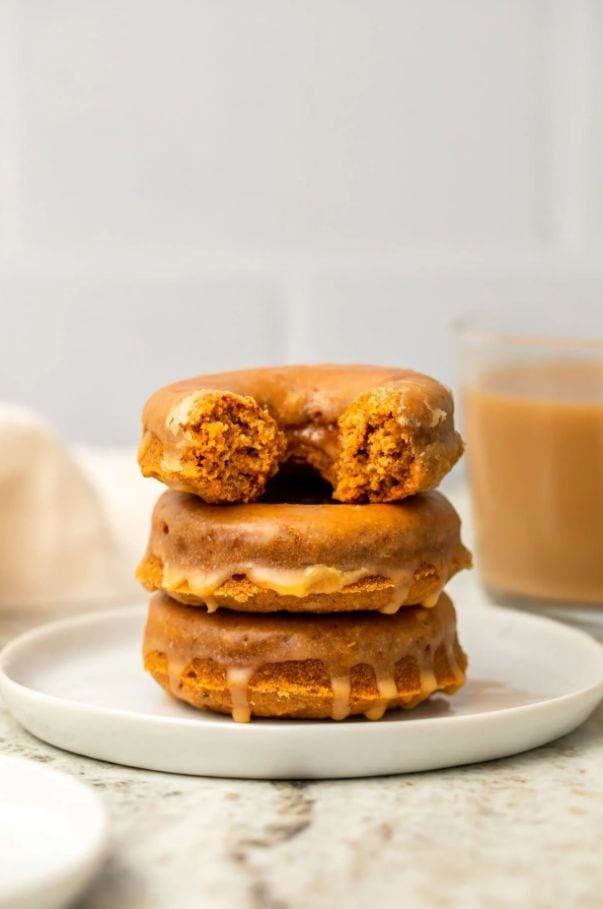 If you’re looking for a different kind of spiced donut that doesn’t have the typical cinnamon and nutmeg, check out these chai spiced donuts from From My Bowl.

The chai batter in these donuts is topped off with a sweet pumpkin glaze that makes this donut a balanced-tasting breakfast treat. 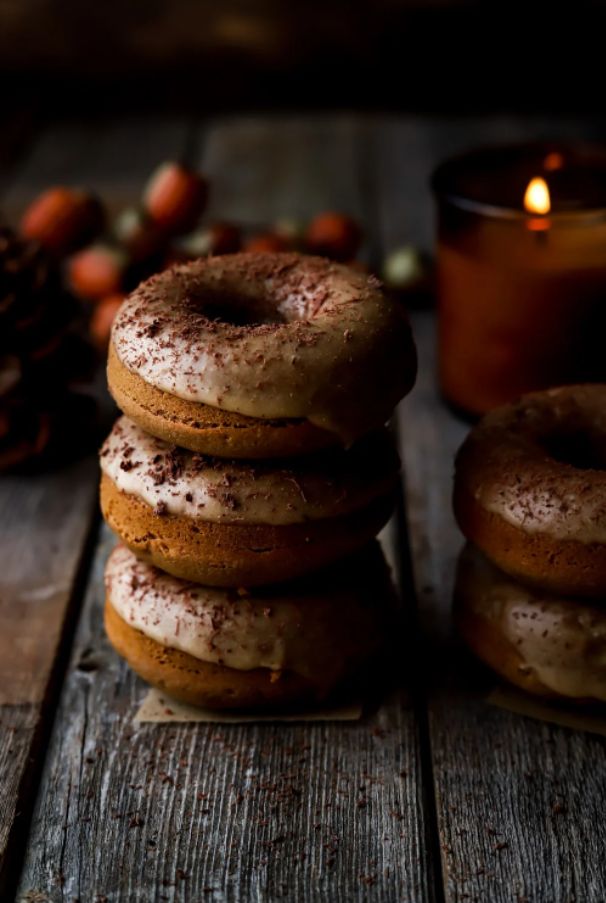 For another donut that is flavored like one of your favorite breakfast beverages, this gluten-free Vietnamese coffee donut at Cooking Therapy combines the flavors of condensed milk, coffee, and mochi for a decadent breakfast that is sure to wow any houseguest. 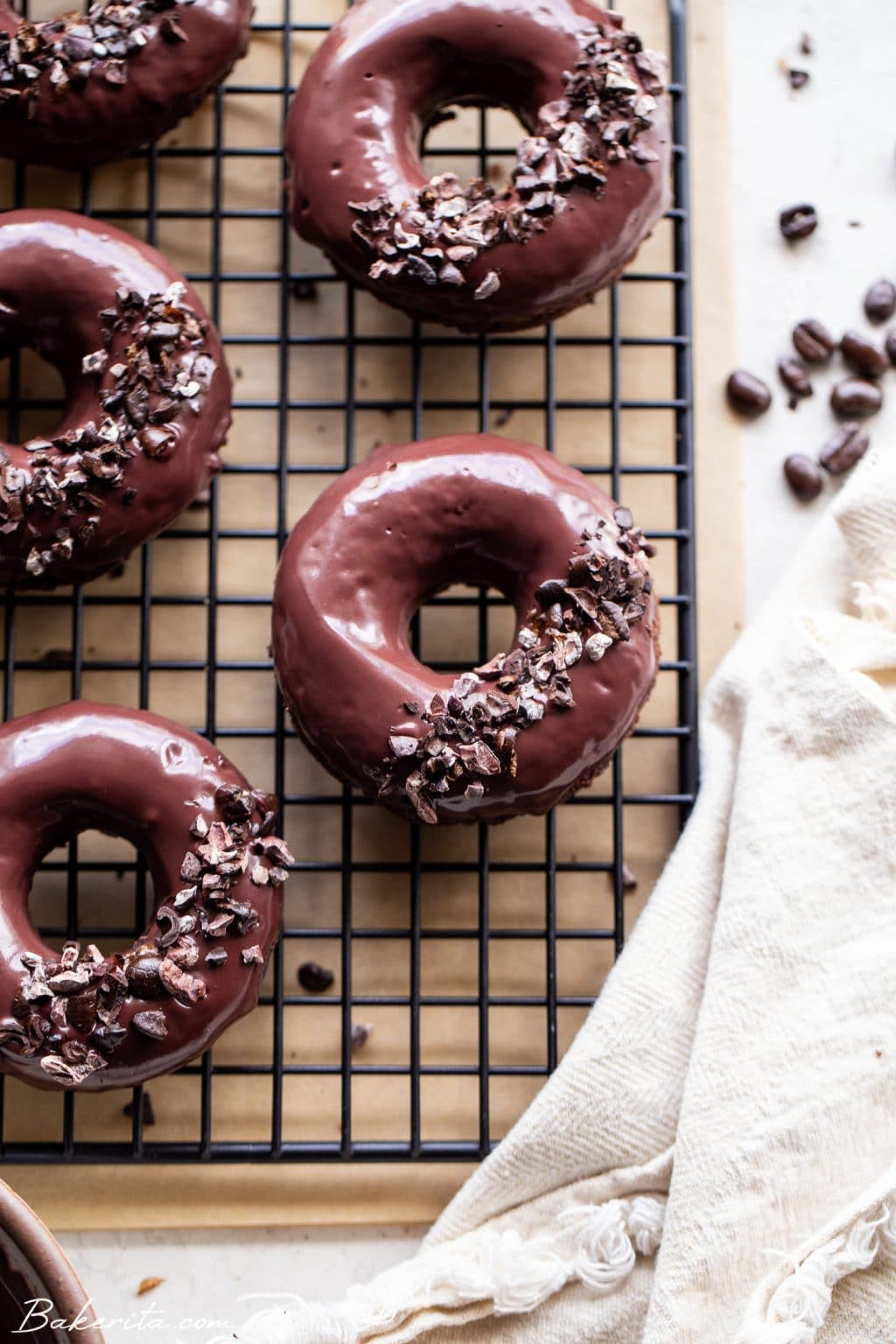 Here’s another coffee-flavored gluten-free donut from Bakerita. For a mocha flavor, these donuts combine chocolate and coffee for a vegan dessert that is also free of refined sugars.

This makes them a healthy option that is so soft and rich they’ll make you forget you’re not eating a standard bakery donut. 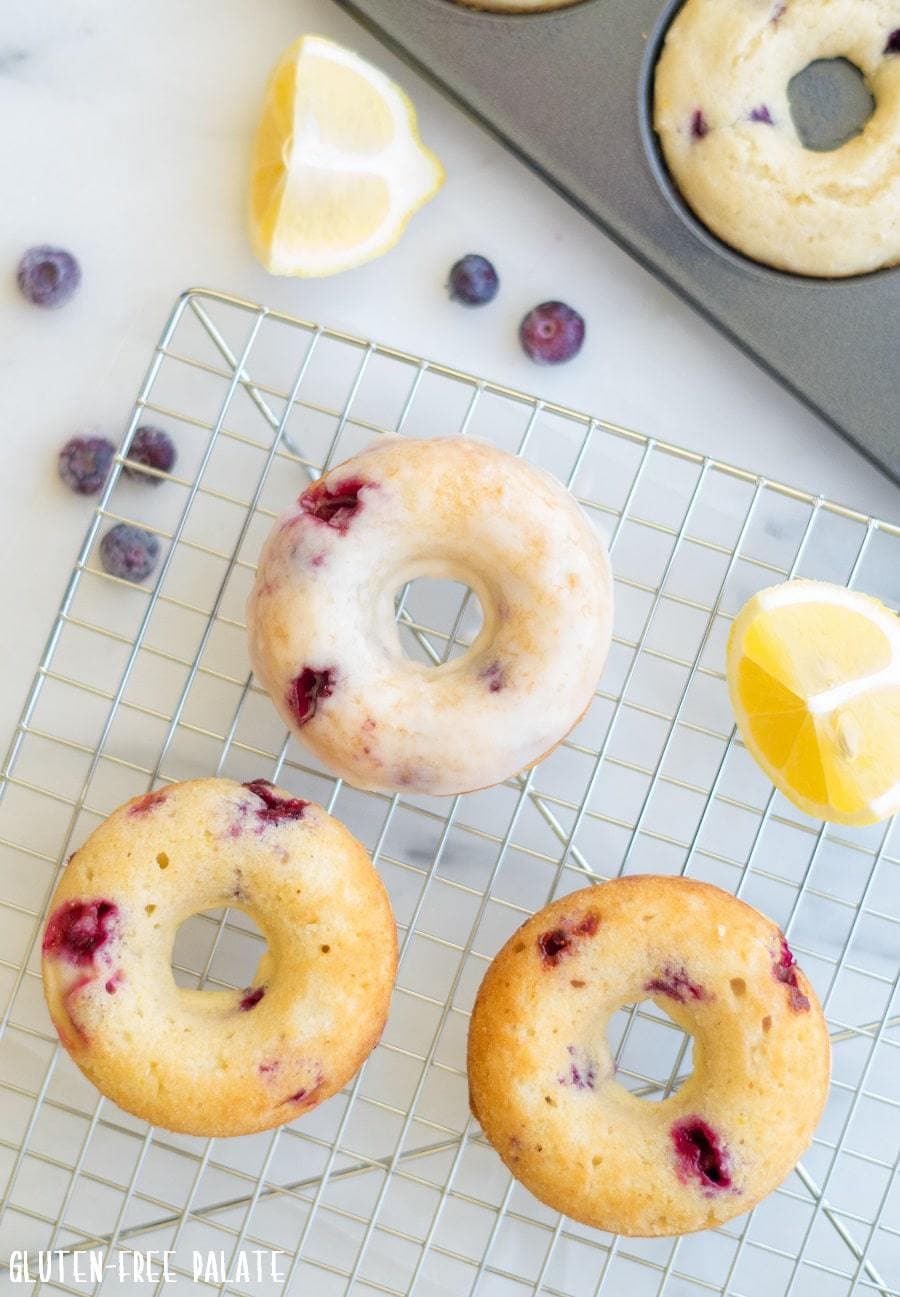 The gluten-free blueberry and lemon donuts at Gluten-Free Palate are studded with fresh, juicy blueberries and plenty of fresh lemon zest for a fragrant citrus and berry flavor.

Another advantage of this donut recipe is that it comes together quickly for a decadent breakfast for busy weekday mornings. 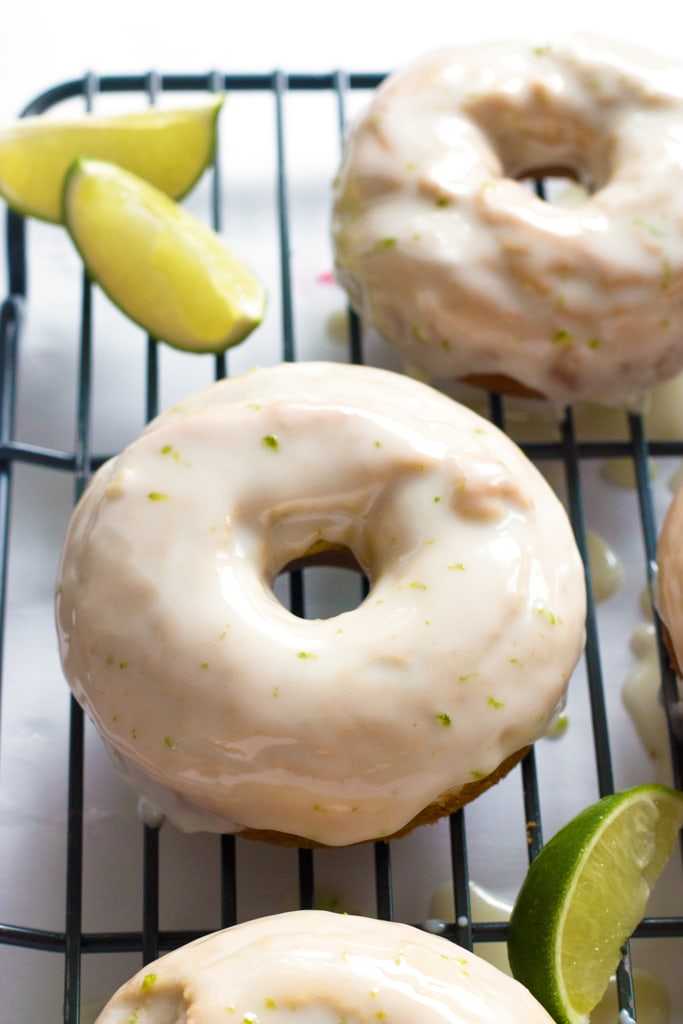 Nothing says summer quite like key lime pie, and these gluten-free key lime donuts from Grain Changer help channel all of the traditional flavors of a key lime pie into a form that’s fit for breakfast.

Thanks to the inclusion of protein-heavy Greek yogurt and vitamin-rich lime juice, you won’t even need to feel guilty about munching on these tangy pastries.

Once you have your ingredients together, follow these steps for delicious vanilla gluten-free donuts:

In a mixing bowl, mix together the gluten-free flour, baking powder, sugar, and salt.

In a separate mixing bowl, whisk together the milk, vanilla, eggs, and oil.

Mix the wet ingredients into the dry ingredients, whisking until combined.

Spoon the batter into the donut pans, filling each donut halfway full. This will give the batter room to rise.

Bake donuts for seven to nine minutes or until the batter has risen and set.

Carefully remove the donuts from the donut pan with a rubber spatula and move them to a cooling rack. Cool for five minutes, then place the cooling rack over a piece of parchment paper.

Combine the milk and powdered sugar for the donut glaze and heat in a covered container in the microwave for thirty seconds. Remove from the microwave and whisk to dissolve any remaining sugar lumps in the glaze.

Dip each cooled donut in the glaze.

How Much Gluten Is In a Standard Donut?

Standard donuts are considered a high-gluten food since they are made with wheat flour. This means that standard donuts should be avoided by anyone with a gluten intolerance or celiac disease.

Does Krispy Kreme Have Gluten-Free Donuts?

Does Dunkin Have Gluten-Free Donuts?

Like Krispy Kreme, Dunkin Donuts does not offer any kind of gluten-free donuts or food items.

Even though major donut chains like Krispy Kreme and Dunkin Donuts don’t have any gluten-free donut options, there are still a few brands that sell gluten-free donuts. Here are a couple you can try:

It is true that gluten-free donuts can be a little hard to find at the store or donut shop. If you’re having a hard time finding them, the recipe guide above should give you plenty of inspiration for baking up your own homemade batch of these tasty breakfast treats.