I used to think that peanut butter was the cats meow, I would eat it shamelessly right out of the jar, with a spoon, or even a fork if all the spoons were in the dishwasher. Then, I met Mr. Almond Butter and everything changed. Although PB was my first love, I’ve grown, I’ve changed, I’m a more mature woman, and almond butter… it’s just better.

Don’t get me wrong, I’ll go for the peanut butter once in a while, but the almond butter, it’s the jar you’ll find front row centre in my fridge with the lid barely screwed on because let’s get real, ain’t nobody got time for that.

So I was craving a snack the other week and moseyed on over to the fridge for that jar of delicious, creamy, smooth and nutty almond butter, and as I was reaching for a spoon I spotted the perfectly ripe pear on my counter. I had bought this pear specifically because it had been ages since I’d enjoyed a good pear and I wanted to find a way to post about it.

Pears are truly luscious but I feel they often get overlooked. Well, I tend to overlook them anyway, typically going for the bananas, apples, or berries instead. I’m not sure why, I just forget about pears and how delicious they really are.

Not only are pears divinely tasty they are packed with soluble fibre which is found in both the skin and the flesh!

The skin of pears also contains powerful phytonutrients including antioxidants which work to prevent cancer and inflammation in the body. These lovely fruits are low on the glycemic index, bursting with Vitamin C, and they taste pretty darn delicious smothered in almond butter!

I grabbed the pear, the jar of almond butter, and the container of muesli I also had sitting nicely on the counter.

I sliced the pear ever so carefully in a not-so-traditional way, so that I had little pear “rounds” perfect for slathering with almond butter. I topped each “round” with the butter and sprinkled a generous layer of muesli on top. I used an unsweetened muesli with whole almonds, dried dates, and rolled oats.

I quickly eyed the shredded unsweetened coconut in my pantry and sprinkled some of that on the pear slices too. Oh yes, almost perfect.

Almost. For the finishing touch, a light drizzle of sweet, sticky, raw honey!

I stacked a few of the finished slices on top of each other and chose to make little “sandwiches” with a couple more of the slices!

The simple, fresh, luscious pear was the star of this filling mid-morning snack and it worked wonderfully with the almond butter. A combo that was definitely meant-to-be! 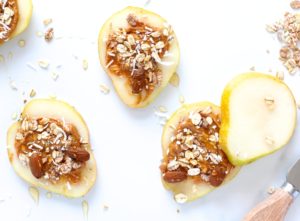 Print
Prep time
5 mins
Total time
5 mins
Serves: 1
Ingredients
Instructions
3.5.3208
Are you a fan of pears? How do you like to enjoy them? I’d love to hear about it in the comments below!

Have a lovely Wednesday!